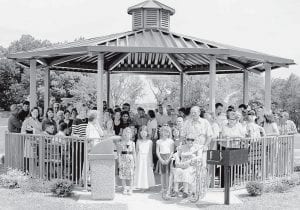 Members of the Lockport Mennonite Church congregation fill the new gazebo-style picnic shelter, built on church property, during the June 15 dedication ceremony. The shelter was built to honor the late Walter Stuckey, Lockport pastor from 1938 to 1981. He died in 2005. At the front right of the entrance is Virgie Stuckey, Walter’s wife. Behind her is their son, Bill. The shelter is located across from the Lockport Covered Bridge on Williams County Rd. 21-N. – courtesy ph oto

It has several picnic tables, benches, a grill, and accommodates 20 or more people.

Cliff Brubaker, interim pastor, said money to build the shelter came from gifts to the church.

“I’m really quite surprised by how many people stop by,” he said.

While he’s not sure the shelter has hosted its first picnic, it has been used as a checkpoint for runs and motorcycle rides.

The shelter, located on church property across from the Lockport covered bridge, was built in honor of Walter Stuckey, a former pastor.

Walter’s wife, Virgie, cut the ribbons to the entrances at the June 15 dedication ceremony.

Bill Stuckey, Walter’s son, said, “My dad cared deeply about two things that meet in this shelter. He always believed it was important for families to spend time together, and particularly for fathers to spend good time with their children.

“He loved the bridge, and grew up playing on the family farm beside the Tiffin River.”

“He would be happy if the shelter could serve to make for good family time in the outdoors,” Bill Stuckey said.

Stuckey said his father wanted the church to reach toward the community, serving in any way it could, and welcome people to join the congregation

The gazebo is open to the public year-around.