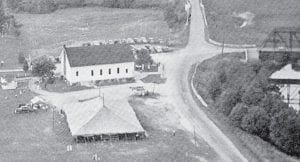 The dedication service at Lockport Mennonite Church was held Aug. 23, 1908, with 850 people in attendance, and 161 horse and buggies at the hitching post.

Today’s membership is hoping to match the same number of people, not horse and buggies, at the 100th anniversary services this weekend.

Commemoration begins with a service and cookout Saturday evening, and continues with services Sunday morning followed by a potluck dinner.

A musical program is planned for Sunday afternoon. All events will be held at the church, located on Co. Rd. 21-N, in rural Williams County, near the covered bridge.

Lockport Mennonite Church traces its history back to some of the first families who settled in Northwest Ohio.

Six Amish families settled in the area and held church services in the log cabin home of Christian Lauber in 1835.

The first Lockport Church was built in 1908 at a cost of $2,897 in the village of Lockport. Records show the land for the church was purchased for $100.

The white frame meeting house was 36×52 feet with four rows of benches, with a center partition to divide the men and women.

In the early years Lockport was one of three area Mennonite churches that functioned as one and shared ministers. It wasn’t until 1922 that the congregation began holding its own services every week.

That first frame church building went through several enlargements and remodeling projects over the years.

The current brick sanctuary was built in 1962 and dedicated on Palm Sunday, 1963. Later, side additions were added to the main church in 1976 and in 1995, including classrooms, offi ce space and an elevator.

As the church marks its centennial, the congregation has over 400 members and a host of ministries for men, women, youth, children, and senior citi zens.

The Sunday morning service features such traditional elements as scriptural readings, prayer, hymns, and sermons, as well as more contemporary aspects such as praise bands and dramas.

Allen Rutter, who served as lead pastor at Lockport for over 18 years, said the “blended worship” style was one of the striking changes he witnessed during his years at the church.

“Originally the worship was led by the pastor and perhaps one other person, with special music provided by a solo or quartet,” Rutter said.

“That changed to a worship team led by praise bands, with five different teams available to lead worship services.”

Rutter also mentioned that the Lockport congregation had reorganized its church structure, moving from a church council format to a “ministrybased structure, with leaders of various ministries implementing the vision and mission of the congregation.”

Lockport was somewhat unique in that from the very beginning, the church had multiple pastors leading the congregation rather than one individual.

Simon and Walter Stuckey, pastors, led the church in its early days. They were later joined by Earl Stuckey.

“At one point during my years as pastor,” Rutter said, “there were 36 different Stuckey families attending Lockport.”

The tradition of multiple pastors has continued, and Rutter said he served with five pastors during his tenure at Lockport.

But the more important constant at the church, according to Rutter, is “the commitment of the congregation to striving to follow Jesus, His lifestyle and His teachings in the gospel.”

Rutter said that members of the church have always shown a deep commitment to Christ and to family values. It always has been a very warm and friendly congregation, and very welcoming to people from various communities and backgrounds.

“And while they were once predominantly farmers, there are now people from many different vocations who attend Lockport.”

As it celebrates 100 years as a congregation, the Lockport Mennonite Church can point to some things that have changed over the years, and also celebrate the commitments to Jesus Christ, to strong families, and to friendly outreach that has characterized it throughout its past.