Several area World War II veterans traveled to Washington, D.C. as part of an Honor Flight to view the World War II Memorial. Olen Genter, top, seated, a veteran of the U.S. Army Air Corps, and his son, Dean, of Pettisville, are shown at the memorial. Dean was his father’s guardian during the trip. Behind them is a fountain; tall structures on the sides are monuments to individual states. Olen, lower left, with a quote from Harry S. Truman carved in the memorial. Lower right: Charles “Til” Schnitkey, right, Archbold, with his uncle, Orville Schnitkey, Napoleon. Both are WWII vets; Til served overseas in the U.S. Navy.- courtesy photos

They have been hailed as America’s Greatest Generation. Men- boys, really- who stepped out of their high school classrooms, off of tractors, out of their jobs, and went off to fight World War II.

When they returned, Brent Bischoff, Henry County veterans’ service officer, said there was no fanfare.

“The next day, they were back in the fields or back on the job,” he said.

“In their minds, they didn’t deserve (any honors). They stormed the beaches at Normandy, they’d been Prisoners of War, they’d been wounded, and they would say, ‘It was no big thing, I was happy I could do it.'”

Now, as the veterans reach their twilight years, they are being recognized with Honor Flights to the nation’s capital to visit the National World War II memorial.

Several area men took their flight to Washington, Saturday, May 3.

Olen Genter, Pettisville, and Charles “Til” Schnitkey, Archbold, said the same thing about the Memorial- it brought tears to their eyes. 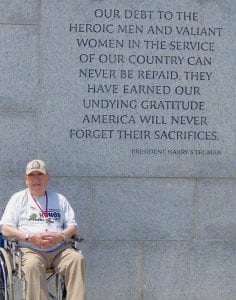 Genter was in the United States Army Air Corps. Drafted in 1942 just as he started college at Bowling Green State University, he became an aircraft mechanic instructor.

But later, he was given ad- ditional training, becoming a flight engineer on a B-29 Superfortress bomber.

He went on five low-level bombing missions over Japan before the war ended.

“It made tears come to my eyes,” he said.

When asked if he was emotional while visiting the Memorial, he said, “I’m emotional right now,” talking about it.

Schnitkey is a U.S. Navy veteran. The Navy sent him to carpenter’s school, and then on to Vero Beach, Fla., a naval aviation training base. While there, he saw two student pilots collide in mid-air and crash. 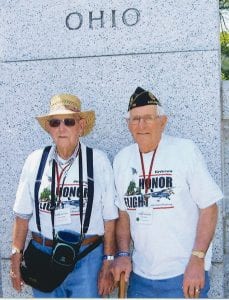 Til eventually wound up in the Philippines, where he ran a fleet recreation center, and even judged a beauty contest of Filipino girls.

Schnitkey said he was struck by the respect showed by everyone at the monument.

“There were thousands of people there, and 200 to 300 buses. Most were very polite. They really appreciated the WWII veteran. They wanted to shake your hand, and thank you for your service.

“I’ve never had anything like that happen to me before,” he said.

The veterans left from Napoleon in buses escorted by Henry County Sheriff Deputies and an honor guard of motorcyclists.

Accompanied by chaperons known as “guardians,” the veterans boarded a chartered jet for a 70-minute flight to Washington, D.C.

For Genter, it was the first time he’d been in a plane since his last mission over Japan in 1945.

For Schnitkey, it was the first time he’d flown. 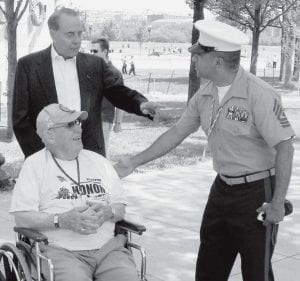 Above: Genter with Bob Dole, former U.S. senator from Kansas, and an unnamed marine sergeant, at the World War II Memorial. Dole is a disabled veteran of WWII. Top right: Genter at the United States Marine Corps War Memorial at Arlington National Cemetery. Below right: The Korean War Memorial depicts soldiers on patrol in rain ponchos, slogging up a hill. – courtesy photos

Bischoff said it’s important that the veterans get the honor they deserve. Many are now too old to go by themselves, or are unable to afford the trip.

He started collecting money in October 2007.

There were 11 Ohio counties and four states represented on the flight.

The group visited other memorials in Washington D.C.: among them, the Korean War Memorial and the Vietnam Memorial.

“We were all amazed at the statues,” Genter said.

Neither Genter or Schnitkey had been to Washington before, although Genter traveled through the city on a troop train.

When they returned to Toledo Saturday night, Genter said there were people at the airport to greet them, again thanking the veterans for their service. 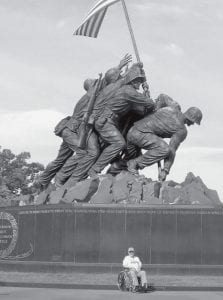 Bischoff said the whole day was overwhelming for everyone, veterans and guardians (two-thirds of whom were veterans themselves) alike.

“It was worth the trip,” Genter said. 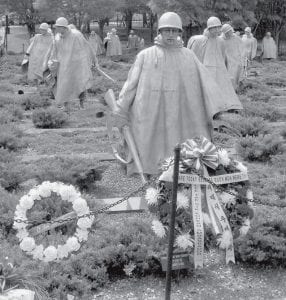