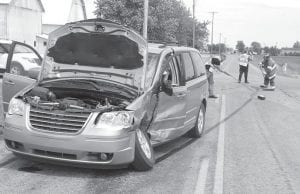 Archbold firefighters sweep broken glass from the pavement after a two vehicle crash at 2:49 pm, Friday, June 9, at the intersection of Henry Co. Rd. W and Co. Rd. 24. One woman was treated and released at the Fulton County Health Center following the crash. None of the passengers of the minivan required a trip to the hospital.– photo by David Pugh

A minivan, driven by Johanna Fritz, 45, Archbold, was traveling south on Fulton County Rd. 24 (which becomes Henry Co. Rd. 24 at the intersection).

Passengers in the minivan were Rachel E. Fritz, 17, Hannah J. Fritz, 15, and Simon J. Fritz, 11, all of the same Archbold address.

The report states the minivan did not come to a complete stop, then drove into the intersection. They collided.

ALS-1, the Archbold-based paramedic unit, and Archbold Rescue responded to the crash. The rescue squad transported Rosebrook to the hospital.

Fritz was cited for failure to yield the right-of-way.