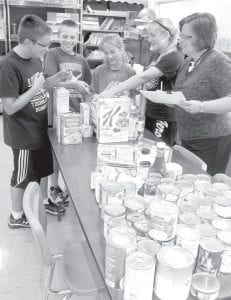 Students from Archbold Middle School are joining men and women across the nation to make September 11 more than just the anniversary of a national tragedy.

The day is now a federal recognized day of charitable service.

“My home base is in charge of collecting food each day, and other sixth graders will assist us in packing the food for delivery,” Luderman said.

In addition, Luderman said teachers at the school are raising money, which also will be donated to FISH.

Chloe Nofziger, one of Luderman’s home base students, said the collection is being taken in honor of the people affected by 9-11, including those who served, the victims, and their families.

While many adults still have stark memories of the Sept. 11, 2001 terrorist attacks in New York City and Washington, D.C., and the hijacked plane that crashed in Pennsylvania, Luderman said most school-aged children either weren’t born or were too young to remember 9-11.

Elijah Zimmerman, another member of Luderman’s home base, said he was born about three weeks before the attacks.

Zimmerman, Nofziger, and fellow classmates Brooks Behnfeldt and Katie Goehring knew that planes were flown into the towers of the World Trade Center in New York City.

“It killed a lot of people,” Goehring said.

For them, 9-11 might as well be Pearl Harbor, or the Kennedy assassination, or Woodstock… just another event in a history book.

She thought it was very important for her students to know about 9-11, and contribute in a positive way in honor of those who died.

“They’re going to read a story about a girl who was their age on the day of the terrorist attacks, and I have a video clip to show the after effects of it.”

Luderman said when teaching 9-11, she has to be sensitive to the students.

Some, she said, are upset greatly by it. Others are not particularly impressed.

Luderman shared a personal 9-11 memory with her students.

Her sister, Jackie DiSante, and Jackie’s husband, Anthony, of Upper Arlington, had planned to be in Tower 1, the second tower that collapsed on the morning of the attacks.

At the last minute, they decided to take a later flight to New York.

“I want them (the students) to take away that this happened, that it was a tragedy, that it changed our country forever, and that, as a nation, it’s more important to focus on what we can do to pay things forward, to honor those people (the victims),” she said.

“We can mourn them, but maybe now it’s time to start moving in a positive direction towards hope and change.”

As of Monday, Sept. 9, the first day of the collection, about 125 food items had been collected.

Nofziger said the FISH food pantry “helps people who don’t have food like we do.”

“I told the kids they would be surprised how many families and families of people they know use the services of FISH,” Luderman said.