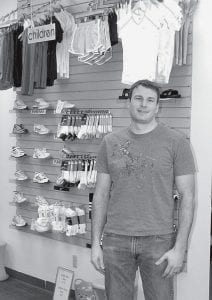 Kyle Brodbeck, president of Locker Room, Inc., stands in the new Locker Room Essentials retail area. Brodbeck said the company’s decision to open additional retail space is a vote of confidence in downtown. To keep retail going in a small community, “You have to try new things,” Brodbeck said.- photo by David Pugh

While Archbold and the rest of America suffer under difficult economic times, there are local entrepreneurs who are optimistic and expanding their businesses.

Kyle and Tara Brodbeck, owners of The Locker Room, have opened new retail space in the Archbold Downtown Historic District.

Bette Kohv, owner of The Scrapbook Korner, has moved her shop into a much larger area.

Chad and Michelle Kruse and Kari and Justin Dominique, owners of Videos Unlimited, are adding a party supply business to their operation.

The Brodbecks purchased The Locker Room about 10 years ago. With it came two downtown storefronts.

One was used for retail sales, while the second was converted to office space.

The Locker Room ventured into the Chicago retail market, but that attempt was unsuccessful.

So, they moved the fixtures from the Chicago operation into what had been office space, and created “Locker Room Essentials.” 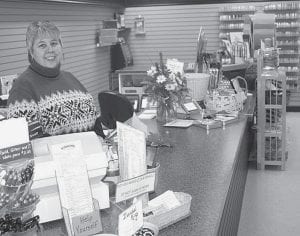 Bette Kohv, behind the counter at Scrapbook Korner. Her store is the only independent retail scrapbooking store in the area. It draws customers from across Northwest Ohio. The store stayed in the same building, but moved into a larger space, over the New Year’s holiday. – photo by David Pugh

“We’re going to offer a better selection of Nike, Adidas, and Alo, a new company offering bamboo fabric. It’s a six-month-old company from California that’s very greenfriendly. They recycle material into tees and tanks for men and women,” he said.

The other side of the store will become “The School Zone,” offering imprinted apparel with logos and colors of local schools.

“Eventually, we’ll do some remodeling,” he said.

Brodbeck said the addition of Locker Room Essentials is definitely a vote in favor of Archbold.

“I think to keep retail going in a small community, you need to keep trying new things.

“With gas prices where they were, a lot of people were shopping locally.”

That carries over, with people developing a loyalty to the store. Brodbeck said he has seen a lot of people who work in Archbold stop by to shop on their lunch hours.

The 2005 downtown reconstruction, plus other downtown business development, has had a positive impact on the Brodbecks’ business.

“People in the store from other towns talk about how neat our downtown is, and Stella Blue brings a crowd here,” he said.

“I’m hoping, along with everybody else, that the economy in 2009 starts coming back, and people become more confident with their finances,” he said.

Kohv said the Scrapbook Korner’s old space in the north end of the former Wyse Book & Offi ce building was too small.

“In the scrapbooking industry, you can’t just carry the same merchandise. You have to be constantly adding to it,” she said.

The south end of the building with more floor space was available, and if she didn’t rent it, there was the possibility someone else would.

“I knew we were okay where we were. We were good enough to stay there.

“But the new space wasn’t just bigger- it was better space.”

For example, in the old store, her office shared space with the store’s crop room, where patrons could work on their projects.

In her new store, she now has her own office.

The move was completed over the New Year’s holiday.

Scrapbook Korner, which will also soon celebrate 10 years, is unique, because as an independent store, it draws customers from throughout Northwest Ohio. There are no such stores in Napoleon, Defiance, or Bryan.

“The closest ones are in Fremont and Lima,” she said. “Some of our customers come every week from Toledo to shop the Scrapbook Korner.”

Kohv can offer her customers customer service the big box stores can’t. For example, some of the tools used in scrapbooking can cost between $150 and $600.

“That’s not an impulse buy,” she said.

At her store, customers can get advice on how to use the tool and be able to purchase the accessories that go with it.

“We have the best of both worlds. We’re small enough to be personable, and big enough at the same time.

“Maybe I wasn’t always that way. Martin (her husband) and I buy our groceries and gas, and do whatever we can, locally.

“I like to see people in Archbold who think they want to start a business, do something we don’t already have.”

In other words, she would hate to see a business open that would compete directly with another business in the village.

“I’m always excited when a new business starts,” she said.

The Kruses, Ridgeville Corners, and Dominiques, Archbold, operators of the Videos Unlimited store, will open a party store business in the former Scrapbook Korner space on March 21.

The store will handle party supplies, from paper plates, napkins, and cups to wrapping paper, piñatas, and party favors.

They will offer personalized items for weddings and other events,

C. Kruse said there was no other store in town that offered those types of products. People would have to drive to Toledo to find them.

“We thought we could do better,” he said.

While the economy is depressed, “Everybody still has birthday parties and bridal showers,” and a result, there is a need for party supplies.

“You still have to treat yourself. You’ve got to have some fun. Maybe you can’t go to Las Vegas for vacation, but you can have a party here with your friends.”

The couples’ decision to open the party store is a vote for Archbold.