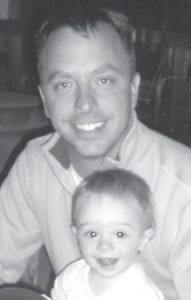 Jason Smith, an Archbold native and 1991 Archbold High School graduate, was elected to the town council of Dillon, Colo., in April.

The son of Max and Joan, Archbold, Jason said the real estate business drew him to the resort community in 1998. He is the president of the Colorado Real Estate Company.

“The average single-family home here sells for $700,000. It’s a much more sustainable market,” he said.

“Even in this challenging economy, my sales in the first quarter were $1.5 to $2 million homes. The super-rich are moving their money out of cash into real estate,” he said.

Smith resides there with his wife, the former Janelle Rupp, daughter of Tim and Patricia, Archbold. She is a 2000 AHS graduate.

They have two children, Joseph, 3, and Joshua, 20 months.

“We like to be outdoors. We like to be on the water. I wanted to go to a place where I could put down roots, and make a living in real estate,” he said.

Dillon itself is located about an hour west of Denver. At over 9,000 feet above sea level, Dillon is located within a few miles of four ski areas; two more are within a 30-minute drive. Summit County has over four million skier visits a year, he said.

The town also is on the shores of Dillon Reservoir, a 3,000-plus-acre manmade lake that serves as part of the water supply for Denver. The community is near a second 3,000-acre lake.

There are about 800 yearround residents in Dillon. Jason said when the tourist season is in full swing, the population swells to 3,600.

Jason said he always has been interested in politics, and figured “now was as good a time as any” to get involved.

There are two big issues on Dillon’s plate: the revitalization of the community’s downtown core, and a redo of Dillon Marina.

“We’re going to have a world-class marina,” he said.