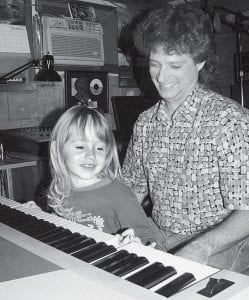 Steve Zaborniak holds his three-year old daughter Emma while she looks over the keyboard in his basement studio. Zaborniak has written songs for radio and television commercials and entered songwriting contests. One of his songs earned him a television Emmy nomination.- photo by David Pugh

An Archbold man, has had his musical compositions played in foreign countries, and earned an Emmy nomination from the National Academy of Television Arts and Sciences.

And it all started with three chords on the guitar.

Steve Zaborniak, who lives at 311 Ditto Street with his wife, the former April Stahl, and their three children, Alec, 12, Michaela, 10, and Emma, 3, got his start in music after his brother showed him three chords on the guitar.

That was in the summer in 1975 or ’76, when they lived at Sheffield Lake, Lorain County.

They had the book, Great Songs of the 60s. “I looked through it and found songs I knew and played them,” he said

Next came piano lessons and the trombone in junior high and high school.

During college at Bowling Green State University, Steve studied biology and took a class in beginning classical guitar. When Steve started the class, “I already knew more than he was teaching me. So the instructor had me help teach his class.”

At the same time, Steve was playing in several bands.

“One band I was in was called ‘Stryker’…I didn’t know at the time there was a town called Stryker.

“We were doing Rush and Van Halen, AC/DC. I guess it’s considered heavy metal. I didn’t consider Rush and that stuff heavy metal,” he said.

Steve later went to work for WNWO, channel 24 in Toledo.

The station was starting an 11 p.m. newscast, “and they wanted to add a Friday night football extended show.

“I talked to the station’s general manager and said I write music, could I submit some, because they wanted music to play under the football highlights.

“I did, and they liked it. Then I was eligible to become an ASCAP member.”

The American Society of Composers, Authors, and Publishers monitors the music played on radio and television, collects royalties, then distributes it among members.

“The first music I wrote for commercial television was on the radio too. That was in 1987 or ’88.”

The company that owned the television station “gave me a shot at writing commercials, and they really liked the first one, for Shorty’s Bar-B-Q. It had a New Orleans jazz sound. Then I wrote a couple for 2 B Mobile.”

It was one of those commercials for 2 B Mobile, a mobile phone company, that was en- tered in the academy competition for the Lower Great Lakes Region.

“There were 50 entries, and four nominations… but we didn’t win.”

“I’m glad I was nominated, because that is a feather in my hat. Writing commercials is very difficult,” he said.

Generally, Steve would write three versions. One full version, with all the singing. The second was a donut, with some vocals at the beginning, a music bed the announcer can talk over, followed by more vocals at the end.

The last one was just music, period.

“Whoever the editor is can cut those up and do whatever he wants,” he said.

Steve’s writing goes beyond commercials. He has written songs that played in Great Britain, Germany, the Czech Republic, and Asia.

He knows he’s getting airplay, because he receives reports and modest royalty checks from ASCAP.

Steve was a semifinalist in a songwriting contest in Great Britain. So he knows the judges hear his music and like it.

He also posts some of his songs on the Internet, and finds more music writing jobs there.

After 10 years with the Toledo television station, Steve took a buy-out. Today he works with Sauder Woodworking, Archbold.

He has mornings off, which he spends with Emma. When she takes her nap and when he gets off work at night, he can spend a little time in his basement studio.

“It’s hard to get in a frame of mind and get work done in an hour, or an hour and a half. That’s why I keep everything set up downstairs, so I can go down there and get things going.”

Steve has songs he’s worked on for six months. “I’ll go down and listen to them and it sounds good, but something’s a little bit off. Everything is in tune, but it doesn’t click, not like I hear it in my head.”

Steve admits, that when he was playing in bands in college, he wanted to make the big time.

Today, though, “My ideal occupation would be writing songs and have other people play them, and every once in a while, be able to play guitar on one of the albums.

“How could you have a better job than that? Write music and have the money come in, then go fly-fishing.

“Do something you want to do.”