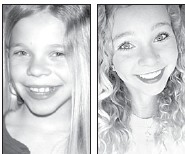 In 2008, Bailey Grieser wrote a letter to Archbold Village Council calling for a Stryker Street sidewalk. Left: Grieser in 2008, when she was a fifth grader. Right: As she appears today. She is an AHS junior.– courtesy photos

The idea of a sidewalk along Stryker Street certainly isn’t new.

In 2008, Bailey Grieser, then an 11-year-old Archbold fifth grader in Shannon Schmucker’s class, wrote a letter to Kenny Cowell, Archbold village councilman, asking for the sidewalk.

She pointed out the need for it.

“Sometimes my mom and I would walk to the (Westfield Medical Center) and back, but Stryker Street is really busy, so we stopped,” she said in 2008.

She said she and her mom (she is the daughter of Pete and Rachel) had tried walking along the side of the road, but found it too dangerous.

Five years later, village council approved the design and bidding of a sidewalk along Stryker Street from DeGroff Avenue to Westfield Drive at its July 1 meeting.

Today, 17-year-old Grieser, an AHS junior, said she remembers the letter she wrote to council.

“I think even though it’s five years later, it’s still a great idea,” she said Monday.

“Even though I have my driver license now, I’m sure I will use it. I think it’s great.”

Why did it take five years for village officials to follow through?

Bob Seaman, village engineer, said building a sidewalk on Stryker Street wasn’t as easy as laying down a ribbon of concrete.

There are utility poles in the area a sidewalk would normally occupy, and since there are no curbs and gutters in some places, there are storm water drainage issues to deal with.

Seaman said originally, council decided to wait to build a sidewalk until Stryker Street was reconstructed in the future.

But in 2012, the Ohio Department of Transportation, in somewhat of a surprise move, announced it would resurface the street as part of its resurfacing plan for St. Rt. 2.

So the decision was made to go ahead with a sidewalk.

How did the village engineering department handle the utility pole and drainage issues?

Seaman said village engineers put some curves in places and angled the walk in others to avoid the poles, road signs and other obstacles, while dealing with the drainage issues along the way.

“Once we figure out the alignment, it’s not rocket science,” he said.

So how did they figure the alignment? Did they send someone out to Stryker Street to look at it?

“That’s essentially how it went. I sent two guys out there. They came back and said, ‘We think we can do it.’”–David Pugh