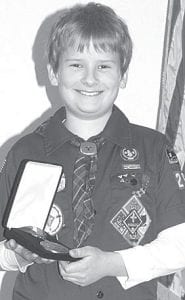 Levi Baus, 10, a member of Archbold Cub Scout Pack 263, with the medallion representing the Scouts’ Super Nova award. Less than 1% of scouts in the U.S. have earned Super Nova.– photo by David Pugh

Levi Baus, 10, Archbold, is a member of a rare group of Cub Scouts.

Baus, a member of Archbold Cub Scout Pack 263, and two scouts from Wauseon are winners of the Scouts’ Super Nova award, for studies in the STEM areas of Science, Technology, Engineering, and Mathematics.

Across the nation, less than 500 scouts earned the Super Nova. That, she said, is less than 1% of the scouts in the United States.

“We had to look up different things,” he said.

“We had to look up a couple of scientists and what they invented. We had to answer a question, ‘why do rockets have fins?’”

Actually, it was more involved than that. Marks said they conducted experiments, such as one with several brands of candies to illustrate the half-lives of radioactive isotopes.

Marks said they also performed calculations, such as how much each scout would weigh on the surface of the sun and the moon.

The boys were surprised by the figures. Because the sun has a much greater gravitational pull, a person weighs 28 times more than on earth.

The scouts also calculated the volume of air in a room.

Baus, son of Chad and Beth, said he felt a sense of accomplishment in earning the award. When he advances to Boy Scouts, he said he might try for the Super Nova award a second time.