Local Boy Treated For Lead Poisoning; House Is Cause 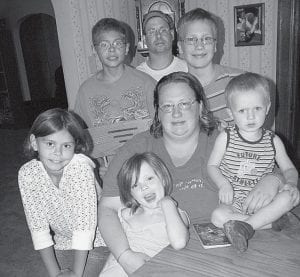 The Rick and Beth Manz family sit in the dining room of their Stryker Street home. Sitting on the table to the right of Beth is 2 1/2-year-old Koalton, who was discovered to have seven times the normal level of lead in his bloodstream last May. Clockwise, from bottom left: Caitlyn, 5; Tori, 11; Derrick Davis, 11; Rick; and Brendon, 12.- photo by David Pugh

When a stranger enters his home he’s a little shy, but soon chats away in a language only a mother understands.

But the situation could have been gravely different.

During a 15-month checkup, Koalton was discovered with lead in his bloodstream, far above the average level.

His physician wanted a second test; on May 14, his lead level was 75 mcg/dl.

At first, Beth said they thought they could treat the problem with a sulfur-smelling oral medication, but local physicians conferred with experts, who called for the child to be hospitalized.

“They called me, and sent us to St. Vs. They said once you have symptoms, it’s irreversible.

“I was scared to death,” Beth said.

Starting May 18, 2007, Koalton spent five days at the St. Vincent Mercy Medical Center, where he was treated intravenously, plus with injections every four hours. He was given other medication one hour before the injection because of the risk of adverse reactions.

The Fulton County Health Department inspected the couple’s house and detected lead in paint on the windowsills.

That was followed by an Ohio Department of Health test.

“They tested the carpet, the water, the soil, everything,” she said.

“There was lead paint on all the window sills, on the fascia, on the soffits, around the porch.”

Koalton had to stay away from the house until the lead was removed. He was away for two weeks, until Beth pleaded with physicians to allow Koalton to come home, on the condition that she would keep the windows shut and leave them shut.

“That’s when we put the air conditioners in the windows,” she said.

“The Health Department taught us how to clean up properly,” she said.

The couple purchased their home in July 2006 after living in a doublewide trailer for years with four children- Brendon, 12; Derrick Davis, 11; a stepchild, Tori, 11; and Caitlyn 5; plus a dog. Koalton was born in February 2006.

They needed a bigger residence.

Beth said when the couple bought the house they were given a disclosure form, but when asked about lead paint, the previous owners said they didn’t know.

They selected their old house because it had a family home feel.

The Manz family qualifi ed for a program known as CHIP, the Community Housing Improvement Program, administered by the Maumee Valley Planning Organization.

CHIP replaced all the win- dows, the front door, and sealed walls with lead paint with coverings that encapsulate the lead paint.

The electrical system was updated.

If the family lives in the house for 10 years, CHIP will write off a portion of the cost, and there’s no time limit on repayment of the remainder.

Beth said the rest of the family was tested for lead, and all passed.

Today, Koalton’s lead level is back to normal.

Koalton will be monitored to see if there are any permanent effects; so far, there have been none.

The incident has left its mark on the family.

Tori said when Koalton was hospitalized, “I was really scared.

“I didn’t know what to think,” Derrick said.

“I was scared. Not scared enough to cry, but I knew he was going to come out of it okay, because of all the technology doctors have.”

Koalton’s father, Rick, admitted to crying a couple of times driving home from St. Vs.

Beth said today, Koalton can tell the difference between a visit to the doctor and a trip for a lab test.

“He recognizes the lady at the Archbold Hospital lab. The minute she opens the door, he’s terrified.”