Past and present members of the Archbold Lions Club celebrated the 50th anniversary of the service club, Saturday, Nov. 8.

Seventy current and previous members and guests attended a dinner and program in the Ruihley Park Pavilion.

Joe Short, club member, presented current information on the club and past activities. He read the names of the 22 char- ter members. Included were Don “Pete” Nofziger, who, Short said,” has been in more Lions Club projects and part of more meetings than any other Archbold Lion.”

Nofziger is the only current member of the club who is a charter member. He received a 50-year Chevron award, and is the only local member to receive the prestigious Lions Club International award.

Cal Short, also a charter member, spoke about why the club was started. He also explained many of the projects completed by the club. 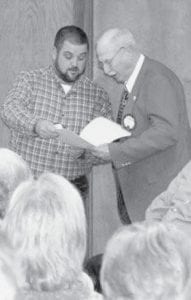 Film of a Lions Club “Spring Review in the Fall,” a 1970s fund-raiser, was viewed. The comedy show, presented in the old high school gym, raised money for club projects.