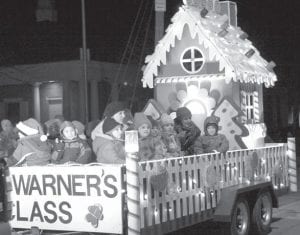 The float with Mrs. Warner’s Kindergarten Class is always a favorite in the Archbold Parade of Lights.–photo by Mary Huber

There were gaps in the parade, and that’s something that the chamber parade committee will always have to contend with, she said.

“Each driver, no matter what you tell them, has their own opinions about what the right pace is. They sometimes believe the float ahead of them is going too fast, so they’ll slow down.

“Anytime you’re dealing with people, you’re going to have that. There will always be some delays.”

Martin Schmidt, Archbold police chief, said he observed the gaps in the parade.

“It boils down to the drivers operating the units, who decide not to keep up,” he said.

Schmidt said he had heard that with the new route, the parade seemed to come together better.

“We didn’t have as much trouble getting traffic shut down. That’s always a problem. This year, it went well,” he said.

Dowdy said there were about 50 entries, and as usual, five units showed up without registering.

Dowdy said she didn’t get to see the crowd along the whole parade route, but was pleased with what she saw downtown.

“There were not any open spaces” along the curb, she said.

Schmidt said it was diffi- cult to compare the crowd to previous years because of the new route, but he said there were some big crowds on Stryker and Walnut streets.

“Overall, I thought the crowd was well dispersed, with a good turnout,” he said.

Entries in this year’s parade included old favorites and new additions– plus one new one that was actually old.

The Archbold Fire Department decorated its new aerial ladder truck with Santa, his reindeer, and sleigh. While this was the first year for the new truck, the department had similarly decorated its old truck for years.

Another repeat favorite was Mrs. (Kris) Warner’s kindergarten class, which is in the parade every year.

Dowdy said there were also more horses in the parade.

Based on a zero-turningradius lawn mower chassis, the little plastic building would dart in one direction, stop and spin, than dash off in another direction.

“Everybody loves the outhouse. They almost didn’t bring it this year,” Dowdy said.

About halfway through the parade, the Christmas decorations in the Festival of Lights were turned on, Dowdy said.

“We were afraid with all the rain we’d had, the lights wouldn’t come on, but they did.

“People who came out for the parade saw something special,” she said.

Schmidt said after the parade, officers directed traffic for the lights festival, as in the past.

Overall, Schmidt said he thought the post-parade traffi c flowed better than it had in the past.

Parking was still available in the downtown area prior to the parade, he said.

Jennifer Kidder, parks and recreation director, said there were 125 pictures taken with Santa, down about 25 from last year.

“I think it was a nice parade, as always,” Schmidt said.

Dowdy said the chamber parade committee meets next week to evaluate it.

“We appreciate everyone’s cooperation with the new route and their willingness to support the parade.

“It’s a tradition we have here in Archbold, and we want it to remain that way,” Dowdy said.