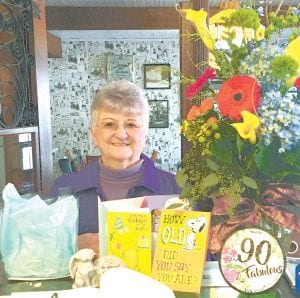 Shirley Wyse with some of the cards and gifts she received for her 90th birthday, Monday, Nov. 18.– courtesy photo

Shirley Wyse, a lifelong Pettisville resident who celebrated her 90th birthday on Monday, Nov. 18, says she has a lot to be thankful for.

One of those things is the town of Pettisville.

“It’s a great place to live,” said Shirley, who has lived all but eight of her 90 years in the small, unincorporated village.

For eight years, when she was first married, she lived on a farm a few miles outside of town.

“The people of Pettisville are like a family to me,” Shirley said with a smile. “We care about each other even if we disagree about things.”

If Shirley hadn’t known that people in and around Pettisville cared about her, she probably would have figured it out when more than 50 people stopped in at Sunday’s Market, the general store in Pettisville, on Monday to wish her a happy birthday.

Luana manages Sunday’s Market. Her mother often helps out when she needs someone to mind the store.

On Monday, Luana told her mother she had a meeting and asked Shirley if she would come in and run the store in the afternoon.

Luana had asked people to stop in and wish her mom a happy 90th birthday on Nov. 18.

She even placed a classified notice in this newspaper, asking people to, “stop in at Sunday’s Market…to wish Shirley Wyse a happy 90th birthday and ‘surprise’ her (she thinks she is working).”

“I never suspected anything,” Shirley said. “I often help out when Luana has to go somewhere.”

Not only did lots of people stop in and wish her a happy birthday, but after it was posted online, she also got phone calls from people who no longer live in Pettisville, including a childhood friend who now lives in Arizona.

When asked how Pettisville has changed over the years, Shirley thought for a minute and said, “It’s pretty much the same. Some things have changed, but a lot of the town is the same.”

She should know. Not only has she lived in the Pettisville area all her life, but she has actually lived in the same house for 82 of her 90 years.

“My parents built this house before I was born,” Shirley said.

“I grew up here. I was married in the living room of the house when I was 18, and then we moved back into this house when we had been married eight years and my father passed away and my mother built the house across the street.

“Marv (Shirley’s husband) and I bought this house and moved back, and have been here ever since.”

When Shirley was young, there were only about ten children who lived in town, and they all played together.

She remembered playing tag, riding bikes, and other games. She said they used to make toys like scooters out of used boards and old roller skates, and she remembers designing clothes for their paper dolls with her friends.

Shirley said she thinks the world could learn a thing or two from a little town like Pettisville.

“We might disagree, but we don’t attack each other or put each other down,” she said.

“I don’t watch the news anymore, because that is all that everyone seems to do, is pick on the other side and say nasty things about them.”

No wonder Shirley is thankful for Pettisville.

And she is right. The rest of the world would benefit if it was more like Shirley’s vision of her hometown, where she said, “people take time to stop in and bring hugs, cards, flowers and happy birthday greetings to a little 90-year-old lady instead of waiting until she is no longer with us.”