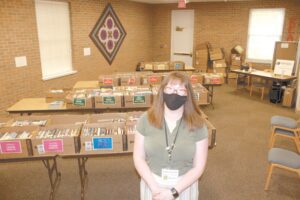 Sonya Huser, Archbold Community Library director, in the library community room, which was still set up for the Used Book Sale when this photo was taken. The board is considering expanding the current building by adding a second room of this size, specifically for children from infant to age 5.­– photo by David Pugh

The Archbold Library Board talked about the possibility of expanding the library during its Wednesday, Aug. 11 meeting.

The discussion of a possible addition was preceded by talk of replacing the current 1.2-mill property tax levy.

The reduced rate is known as the effective millage.

When a levy is set to expire, taxing bodies have two choices. They can ask voters to renew the levy, in which case it continues to be collected at reduced amounts.

Or, they can ask voters to replace the levy.

If a replacement passes, property values are reset to current levels; it is effectively an increase in the amount a levy brings in.

Kevin Seibert, a member of the board property committee, said the current levy will expire at the end of 2022.

The soonest the issue could be placed on the ballot is the May 3, 2022 primary.

Seibert and Jennifer Harkey, library fiscal officer, said plans call for a replacement of the levy.

As of July 31, Harkey said the library has collected about $188,000 from the property tax levy.

Since libraries can’t actually levy property taxes, the Archbold School Board serves as its fiscal agency.

The library board must pass legislation in the coming months to replace the levy, then pass it on to the school board, which will actually vote to put the request on the ballot.

Harkey said the second main source of income for the library, the Ohio Public Library Fund (PLF), has been doing well. Under the PLF, libraries receive 1.7% of state total tax revenue.

In the past, the PLF percentage was cut when Ohio hit hard times.

Harkey said the state legislature has continued the PLF at the 1.7% level.

In her fiscal report, Harkey said the financial situation is on track; revenues are predictable and stable.

Seibert said the property tax levy is not just for funding day-to-day operations and buying books. It is also for building upkeep and “making the library desirable.”

Phase I proposes updating the public area in the library– the main room where the stacks of books are kept– along with tables and chairs, public-accessible computers, etc.

It could also include new furnishings specifically designed for library use, such as tables that feature charging stations for cell phones, tablets, and laptop computers.

Seibert described them as “tables that can handle technology.”

The current building, built with a $1.5-million donation from Sauder Woodworking, opened in August 1995. Seibert said the Phase I plan would “freshen it up a bit.”

A proposed Phase II would possibly revisit the allocation of space for children, from infants though age 5.

He said the committee will meet with architects to see what an expansion of the building would cost, and determine if it’s in the budget.

He spoke about a room, the size of the current community room, which would have its own restroom facilities with child-size fixtures.

He said many times, parents have had to hurry children from the community room to nearby restrooms. Having its own restroom would make it easier on parents.

Another Phase II option could be to add an outdoor seating area to the library, perhaps covered with a pergola.

A pergola can be described as an outdoor structure with a slatted- or lattice-style cover that can provide an outdoor seating area.

Seibert described the potential projects as “a look at potential options to keep the library relevant.

“We don’t want the library to stay the same, because everything changes,” he said.

All library board members were present, and all votes were unanimous.

The next meeting is Wednesday, Oct. 13, 7 pm, at the library.–David Pugh