Library Board Expecting Decreased Funding For ’09 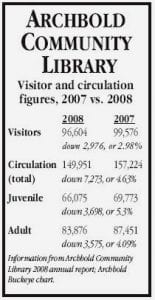 Joyce Klingelsmith, director of the Archbold Community Library, told members of the library board at their monthly meeting on Wednesday, Jan. 14, that with a decrease in state revenue, the library could lose $30,508.

She said libraries across Ohio were told to expect state revenue to be down 10.8% from what had been estimated for 2009.

For the Archbold Community Library, that works out to $30,508, which Klingelsmith said “is a significant decrease for us.”

“We’ll probably need to do something like that again this year,” she said.

For a better picture of the library’s state revenue stream, Klingelsmith she will wait until June, when Ted Strickland, Ohio governor, puts forth his state biannual budget.

The library circulation report showed circulation of adult and juvenile materials, including books, periodicals, etc., was down about 4.6% from 2007.

But, Klingelsmith said the Archbold library’s circulation figures are large for libraries of comparable sizes.

“Even with the decrease, we still have higher circulation that libraries our own size,” she said.

She said it’s hard to look at the circulation report and try to determine what is happening.

She had noticed that young parents were checking out fewer books for their children, suggesting that they might have less time to read to them.

Board members heard proposals for health insurance for staff, but made no decision.

“The board decided to explore additional quotes and other options,” she said.

The board also renewed the library’s property insurance through the Ohio Plan, represented locally by Beck Insurance. The premium is $4,196.

The board ended 2008 with a carryover of $44,306.17, Klingelsmith said. The carryover is important, because the library does not receive any tax revenue for the first few weeks of each new year.