Liberty-Benton Lives Up To Billing, Drops Streaks 42-10 In Regional Semi 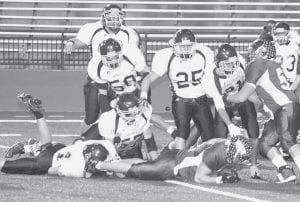 Top: an Eagle is surrounded and brought down by the Blue Streak defense in Saturday’s game. From left: Jared Leninger, Chad Rufenacht (57), Trevor Meyer (50), Kyle Stipp, David Dominique (25), Jackson Gerken (21), and Collin Walker (23). Bottom left: Aaron Bontrager kicks a field goal for Archbold’s only points of the first half. Walker is the holder. Bottom right: Dominique (25) and Trey Westrick (27) tackle L-B quarterback Aaron Craft, who rushed for 153 yards and threw for 177.- photos by Scott Schultz

The Streaks’ season came to a close as the Eagles jumped out to a 28-0 first-quarter lead on the way to a 42-10 victory.

“I am very proud of our seniors,” said John Downey, AHS head coach. “They did a good job for us this year and will be missed. I hope our underclassmen will learn from them.”

Archbold and Liberty-Benton met last year in the regional quarterfinals, with L-B posting a 45-13 win. It was the first time the two squads had played each other.

This year the Streaks advanced to week 12 for the first time since 2002, when they faced Delta in a Div. IV Region 14 playoff game. 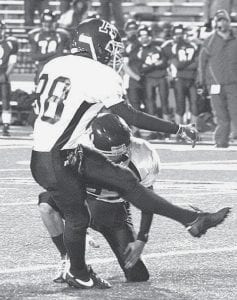 Craft, a junior, has started at the quarterback position for three years and has led the Eagles to playoff appearances each year.

As a team, the Eagles have made the playoffs six straight seasons.

Eagles Get Off To Fast Start

Taking the opening kickoff, the Eagles showed why they came into the game supporting a perfect record. L-B opened with a 10-play drive; Craft crossed the goal line from 9 yards out for the game’s first score.

A quick Archbold turnover resulted in a 14-0 deficit just six minutes into the game.

Starting on the Archbold 20- yard line, quarterback David Rupp came up short on his first pass attempt and rushed for 1 yard on the next play.

Rupp finished the game with a negative-four yards rushing on 10 attempts.

Rupp dropped back to pass on the third play from scrimmage. Brennan Lieb picked off the pass and raced 30 yards down to the AHS 1-yard line. 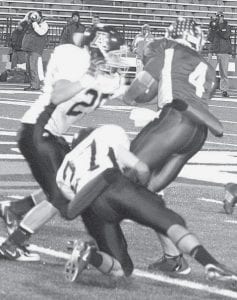 One play later, Craft crossed the goal line for his second TD.

Craft scored again on a 7- yard run with 1:13 left, and teammate Ryan Cook scored on a 45-yard scamper with seven seconds left. The first quarter ended with the Streaks in a 28- 0 hole.

“We didn’t expect to be up 28- 0 after the first quarter, but I was awfully happy with the way we came out and played both offensively and defensively,” said Tim Nichols, L-B head coach.

“That first quarter was the key to the game. When you’re in the playoffs, you get off to a good start and that puts you in a good situation.”

Liberty-Benton’s defense made a name for itself this season, giving up just 26 points and recording eight total shutouts, including six straight entering the contest.

The Eagles’ defense held the Streaks out of the end zone for three quarters and held AHS to 156 yards of total offense, 80 in the first half.

But L-B gave up a 30-yard field goal in the second quarter when Aaron Bontrager put Archbold’s only points on the board in the first half.

The field goal was set up by a 59-yard completion to Breon Price that took Archbold down to the L-B 8-yard line.

The Eagles kept the Streaks out of the end zone by dropping Fidler for a 5-yard loss, followed by two incomplete passes.

Fidler finished with 42 yards rushing on 11 carries. Rupp closed out the game with 100 yards passing on 21 attempts and five completions.

Downey: Craft Is “A Magic Man”

Liberty-Benton is “a good football team,” said Downey. “They controlled the line of scrimmage, and Craft beat us with his feet. We had him a couple of times, but he is a magic man, able to break tackles. He just made plays all night long.

“Bottom line is they are just a very good football team, and Craft is just amazing out there. We couldn’t contain him.”

“Offensively, I think we relaxed a little bit in the second quarter,” said the L-B coach. “Archbold made a big pass play and kicked the field goal, and that seemed to take a little wind out of our sails.

“I think our effort dipped a little bit there, and we came back out in the third and recaptured some of that momentum and finished it off.”

Liberty-Benton was held scoreless in the second quarter, but got back on track in the third when Craft scored on a 5- yard run.

The L-B junior finished with 153 rushing and 177 passing yards.

The Blue and Gold was on the march late in the third quarter on a nine-play drive that ended with an interception.

Marching down to the L-B 7- yard line, Craft cut in front of Rupp’s intended receiver in the end zone and brought the ball out to the 10.

That resulted in a 10-play drive covering 90 yards and Craft scoring his fourth touchdown.

The Eagles added one more score in the fourth with a 9- yard run by Wade Russell.

Archbold’s only touchdown came from a Garrett Morton 16-yard pass to Drew Smith with under three minutes to play.