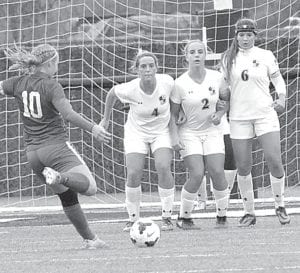 Archbold’s Andi Peterson (4), Emie Peterson (2), and Brooke Kohler (6) form a wall to stop the direct free kick of Liberty- Benton’s Savanah Richards. Richards didn’t score on this play but did get the game’s only goal in the second half to give the Eagles a 1-0 victory and the regional championship.– photo by Mario Gomez

Only one goal was scored in the Division III regional girls soccer championship game at Lake High School, Saturday, Nov. 4.

Unfortunately for Archbold, it was scored by Liberty Benton.

The Eagles (17-3-2) handed the Blue Streaks (20-1) their first and only loss of the season, and advanced to the state tournament with a 1-0 victory.

“We definitely had our chances,” said Jen Kidder, AHS assistant coach. “We were the better team on the field today.

“They packed in their defense. There were seven and eight people back there the entire game, and we just couldn’t get through.”

“This is definitely the best team we played so far this year,” said Mark Pagano, LB head coach.

“We knew Archbold was very strong. We’ve been very good defensively all year, and we knew that’s the kind of game we had to bring.”

Entering the regional final, Liberty-Benton was looking to avenge a 1-0 regular-season loss to AHS.

The key to the game was opportunity: who took advantage and who squandered chances.

The Streaks started the first half with an advantage in possession, playing on the L-B side of the field for the majority of the half.

Archbold had its chances to take an early lead, but some unfortunate bounces and the play of the Eagles’ defense and goalkeeper Sophie Aschemeier held the Streaks in check in a scoreless first half.

Archbold continued to attack in the second half, but L-B stuffed the box defensively and turned away most of the Blue Streak attempts.

L-B started to take chanc- es on the offensive end, and it finally paid off with 20:58 left when Savanah Richards took a shot that hit the upper left corner of the goal for a 1-0 lead.

Archbold was hoping to put the pressure on L-B and gain another comeback win, but the defense shut down every Streak threat.

“We had some quality opportunities. We just didn’t finish.”

The clock wound down to 0 and the celebration began for L-B while the pain of ending their season a week too soon and losing their first game became reality for the Streaks.

It was the end of the line for five AHS seniors.

“They’ve been outstanding leaders. They set the tone from the day we finished last year until now,” said Kidder.

“Every single one of them means the world to this team. I couldn’t ask for a better group of leaders.

“It hurts right now, but the girls had a great season.

“It would be nice to go on, but they can hold their heads high with how they played.”