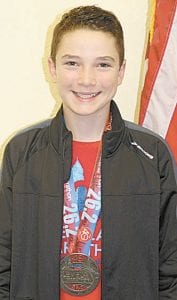 When Liam Row, Archbold, crossed the finish line at the Cleveland Marathon, Sunday, May 21, he heard his named announced over the public address system.

“Liam Row, 14,” the announcer said, adding, “What? I don’t think he’s supposed to be running a marathon! That’s amazing!”

Consider that Row said the average time for a male to complete a 26.2-mile marathon is 4 1/2 hours.

Row said he started running with his mom, Helen.

“I ran my first 5K (fivekilometer race, about 3.1 miles) when I was eight. It was at the Fulton County Fairgrounds,” he said.

“When I was nine, my mom was doing another 5K in Whitehouse and they had a 15K, which is 9.3 miles. I decided I would try it. That was my first long-distance run.”

After being rejected for the Toledo Glass City Marathon for being too young, he set his sights on Cleveland.

He started increasing his mileage about three months ago. His running schedule had to vary, because he was on the Archbold eighth grade basketball team. When they had a game, he would not run.

“I did most of my running around Archbold. We live in town, so I would run out to Woodland Oaks and back. That’s a good 7 to 10 miles. When I did have something going on, my shortest run was 5 miles.”

Trainers suggest running no more than 20 miles while training for a marathon. Others say don’t exceed 18.

The morning of the marathon, Row said it was supposed to start raining at 4 am, and rain all day long.

“I thought, maybe it will hold off,” he said.

The starting line was at the arena where the Cleveland Cavaliers professional basketball team plays. About 15,000 runners were on hand in three different races.

There were about 2,000 persons running the full marathon. Runners were backed up a half-mile behind the starting line.

“It was pretty nice, perfect running weather, 70 to 65 degrees, a nice breeze blowing in off the lake,” to start the race, he said.

At about the 16th mile, “it started pouring.

“It may be weird; I actually prefer running in the rain. It takes my mind off things,” Row said.

“I tend to think too much. You have to be a thinker to keep your mind off things,” like how he’s feeling, or if he’s wanting to stop.

They ran past the field where the Cleveland Indians baseball team plays, the Rock & Roll Hall of Fame, and the Cleveland Browns football stadium.

Then they went west of town, about eight miles out and back.

For the first 10-12 miles, Row ran with a pacer group, a group of runners who run at a particular pace. They hold a sign saying how fast they’re going.

They were going a little fast, so he dropped back.

At the end of a race, runners will put on an extra burst of speed, known as a kick. Did Row have a kick?

“I did. I probably kicked it too much. The kick kind of killed me. I passed about 10 people” before the finish line, he said.

In photos of him taken at the finish line, “you look at my face, you know I was in pain!” he said.

Further, he thought the finish line was at a bridge– but it was actually 200 yards beyond.

He finished 268th overall, and was first in the boys 14- and-under division.

After the race, his dad, Jason, came over and gave him a big hug.

In his own mind, he was saying, “I can’t believe it, I just finished a marathon. At mile 13, I was doubting myself, but, holy cow!