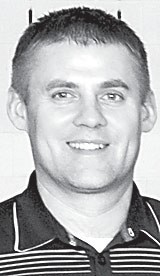 A verson of this article was posted to ArchboldBuckeye.com at 12:40 pm, Friday, April 29.

Brian Leppelmeier has been selected as the new head boys basketball coach at Pettisville High School, it was announced on Friday, April 29, by Pettisville Schools.

He replaces GregNofziger, head coach for 16 years, who resigned.

Leppelmeier started his coaching and teaching career at Pettisville in 1996, where he coached freshman basketball for three years.

In 1999, he moved to Anna Local Schools in Shelby County, where he served as the head boys basketball coach.

He returned to Pettisville in 2004 and has coached at various levels in the girls basketball program since that time.

Leppelmeier is director of athletics and a computer teacher at Pettisville.

Michael Lane, PHS principal, said in the press release, “I am pleased to have Mr. Leppelmeier in this position and am looking forward to his leadership. He is a very dedicated and passionate gentleman who has a vision for the program.”