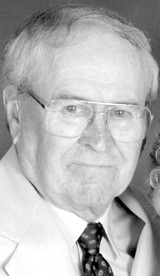 He was baptized and confirmed his faith in his Lord and Savior, Jesus Christ.

Leonard was a member of St. Peter Lutheran Church, Ridgeville Corners, where he served in many different positions.

He attained the rank of Corporal in the US Army during the Korean War.

He will be remembered by his children and grandchildren as a man who faithfully prayed for them.

He was also preceded in death by a son-in-law, Bruce Bly; sisters, Norma Hogrefe and Lorna Tony; brothers, Richard and Roger Miller, and infant twin siblings, Florence and Lawrence.

Funeral services will be held at 11 a.m., today, Wednesday, August 16, 2017, at St. Peter Lutheran Church, Ridgeville Corners. Interment will follow at the church cemetery, where military honors will be accorded by the Ridgeville Corners American Legion Post.

Memorials are suggested to Hospice of Henry County or St. Peter Lutheran Church.

Rodenberger Funeral Home, Napoleon, was entrusted with the arrangements. Online condolences may be made at www.rodenbergerfuneralhome.com.