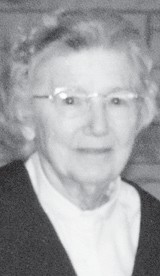 Leona Anna (Rathge) Henry, 96, of Napoleon, took the hand of her Savior Jesus Christ and followed Him to her Heavenly home on Thursday, Jan. 25, 2018, at Fulton Manor, Wauseon.

Leona was a 1940 graduate of Ridgeville High School. She previously worked at General Electric in Fort Wayne, Ind., and devoted her life to her husband and four children.

She was a faithful member of St. Peter Lutheran Church, Ridgeville Corners, where she was a former Sunday school teacher, member of the ladies aid, and was the Cradle Roll secretary for many years.

She enjoyed gardening, baking, canning vegtables and fruits from the orchard and garden. She often baked her famous apple pie.

In addition to her parents and husband of 63 years, she was also preceded in death by grandchildren Deanne Fortier and Ryan Kinsman; greatgrandchildren Mya Nicole Rosebrock and Baby Henry; sister, Luella Rentz; sister-in-law, Lois Rathge; and brother-in-law, Burl Rentz.

Funeral services will be held at 11 a.m. on Saturday, Feb. 3, at St. Peter Lutheran Church, Ridgeville Corners. Interment will follow at the church cemetery.

Visitation will be held on Friday from 2-8 p.m. at Rodenberger Funeral Home, Napoleon, and on Saturday from 10-11 a.m, at the church.

Memorial contributions are suggested to the Ridgeville Fire Department, St. Peter Lutheran Church, or a charity of the donor’s choice.