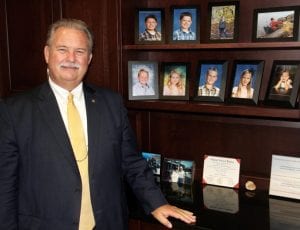 Ed Leininger, 2017 Archbold Citizen of the Year, appears with photos of some of his grandchildren, which he displays in his office at the Farmers & Merchants State Bank. Leininger said his priorities in life are, “God first, then my wife, then my family or my children, then my job.” Leininger is executive vice president and chief operating officer of the bank.– photo by David Pugh

Ed Leininger is a quiet, soft-spoken man whose actions speak far louder than his voice.

Committed to giving back to the community, he’s served 14 years on Archbold Village Council and has been on a wide variety of boards, clubs, and committees.

Now the community has recognized him as the 2017 Archbold Lions Club Citizen of the Year.

John Poulson, a member of the selection committee, stopped into Leininger’s office early last week and gave him the news.

“I was speechless. I was just speechless,” Leininger said.

“John made the comment, ‘Ed, I need you to say yes or no’… I told John I would accept and how much I appreciate the honor.”

The son of the late Albert and Mert Leininger, Ed was one of four boys– the youngest in the family until he was eight, when a fifth brother was added.

He grew up on the family farm five miles north of Archbold. His father also had a lumber business.

“I grew up working in my father’s business from the time I could push a broom,” Ed said.

“I had wonderful parents. I didn’t experience a lot of the hurt and pain many families have had. I’ve been blessed in that sense.”

Ed said he and his wife, June, married young. The pair were high school sweethearts at AHS.

Gene Rupp, former AHS principal and a friend, approached him and asked, “Ed, do you need a job?”

Rupp said Ken Stamm, then-president of the Farmers & Merchants State Bank, had approached him about someone who might be interested in banking.

“So that’s how I got introduced here to the F&M,” Leininger said.

He has been with the bank for 43 years, starting as a drive-up window teller.

He worked his way through positions at F&M, taking additional training along the way. In 2004, he was named executive vice president and chief operating officer, the position he holds today.

“There’s times my job requires me to listen. I think of it in the sense of an extension of a ministry,” he said.

“Money is not the most important thing in life, but it’s kind of in the top three. I say that in a sense, normally, if there are financial problems there’s a breakdown in communication.

“Normally that’s what you’ll see, and if a couple is honest with each other, they would say yes, that’s true.

“There’s a lot of times in my career you sit and you listen and you try to give some guidance.”

He’s been a member of Lions Club, Rotary Club, and the Archbold Area Chamber of Commerce. He is an active member of Archbold Evangelical Church.

“This is one way I can do it, and I enjoy doing it. I’ve met a bunch of wonderful people who do the same thing.”

He said he was fortunate that leaders at the bank encourage staff to serve the community.

“I was blessed in the sense that I worked in a business that encouraged you to do that. That helps, too,” he said.

Ed and June have three children and 11 grandchildren­. The oldest grandchild is 13; the youngest are a set of 10- month-old twins.

He tells the grandchildren to make good decisions, because all decisions have consequences– good or bad.

“My pattern in life is God first, then my wife, then my family or my children, then my job,” he said. “June knows, and my children know, I love her more than anything in this world.”

There is retirement in his future.

“June and I got married when we were very young. I really would like some healthy years for us to do something together.

“The bank has been very kind to me. I think we can make that happen.”