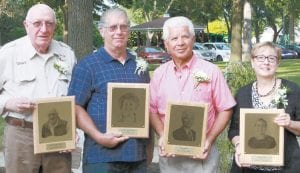 Inductees of the 2017 Fulton County Agricultural Hall of Fame are, from left: Walter Lange; the late Cathy Leininger, represented by her husband, Lee; Bill Serna, and Jane Wyse.– photo by Mary Huber

Four persons were inducted into the 2017 Fulton County Agricultural Hall of Fame at a ceremony at the Ruihley Park Pavilion, Monday, Aug. 21.

A lifelong resident of Fulton County, Leininger lived in the Fayette area.

She spent her lifetime exhibiting dairy cattle and promoting the dairy cattle industry at the Fulton County Fair until her death in 2014.

In 1972, she was the Ohio Holstein Queen. She assisted in the operation of Mor- Ann Holsteins, a small dairy farm in Fayette.

She and her husband, Lee, farmed 400 acres, and she was co-owner and operator of Cottonwood Vale registered Black & Red Holsteins.

Leininger was secretary to the Ohio District 10 Holstein Club, and a representative to the National Red and White and Holstein Dairy Cattle Association conventions.

She always worked hard to teach young people the value of agriculture.

Lange……………….. was recognized for his support of forestry management and the tree farm system in Fulton County.

He has maintained the 56- acre Lange Tree Farm for over 27 years in Swancreek Township. He has planted over 8,000 trees, including white oak, red oak, black walnut, black cherry, white pine and American chestnut.

In 2010, the Lange Tree Farm was recognized as the Ohio Tree Farm of the Year, and in 2011 as the National- Northeast Outstanding Regional

Tree Farm of the Year.

He hosts winter camps for the Boy Scouts, has authored and been awarded an American Forest Foundation-Tree Farm Education Grant, and travels often to Washington, D.C. to lobby on behalf of the family forest owners.

Lange is a member of St. Richard Catholic Church. He has been a member of the Swanton Village Tree Commission for five years, and has served on the Fulton County and Swancreek Township Zoning Commis- sion and the Swancreek Water District Board.

Lange has been the poultry show coordinator and weigh master continuously at the Fulton County Fair since 1980.

He was an active member of the Fulton County Fair Board from 1989-2015, and was director in charge of the poultry building and harness racing.

When he became a fair board director in 1989, Serna was put in charge of the poultry barn, and it remained his responsibility his entire 27 years.

In 1997, Serna led the efforts to build the new poultry barn on the fairgrounds. He served on the advisory committee for best practices of county fair harness racing in Ohio.

Serna and his wife, Janice, raised five children, and have 10 grandchildren.

He served on the cemetery board of Our Lady of Fatima Catholic Church and is a current member of St. Casper’…s Church, Wauseon.

Wyse served nearly 28 years as the office associate for the Agriculture and Natural Resources program at the Ohio State University Extension Office.

She grew up on a dairy farm in Chesterfield Township, and continues to live there.

Until her retirement this year, Wyse provided all the office support for the Fulton County Agriculture Hall of Fame program since its inception in 1983.

She previously worked for a local accountant, assisting farmers and small businesses prepare their income taxes.

Along with her husband, Terry, and sons’…….. …families, Wyse has been an active participant in family farm operations for over 40 years as bookkeeper, truck driver, meal deliverer, and errand runner.

Wyse has been a longtime member of North Clinton Church and helps by teaching, being a youth sponsor and youth mentor.

She is the secretary/treasurer for the board of the Northwest Ohio Agape House, a shelter for women and children.