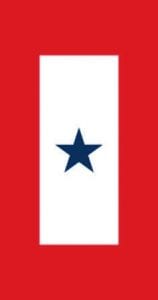 The American Legion and Veterans of Foreign Wars Wauseon post auxiliaries are reviving a tradition of recognizing the families of those serving in the armed forces of the United States.

The tradition involves a small banner with a star, hung in a window.

A blue star on the white field with a red border means a family has a loved one serving in America’s armed forces.

A gold star, on the same white field with red border, means a family member has died in service to his country.

The banners’ roots trace back to World War I. They were revived in World War II. The tradition generally was not observed during the Vietnam era.

Now, for the third year, the two Wauseon groups will present the banners to family members, and recognize them, at a presentation ceremony in late September or early October at the Wauseon VFW hall.

Sherryann Franks, Wausewith on, a member of the Legion and VFW auxiliaries, said she got the idea for the presentation program. 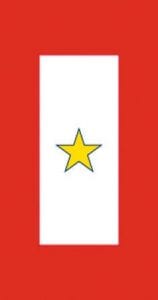 “I knew the banners were out there, and I wanted to strongly support those in the service. I felt the need to start this up and continue it,” she said.

Right now, Franks is compiling a list of area families sons and/or daughters in the armed forces.

The families can come from anywhere.

“No one is turned away,” she said.

Franks said when compiling the list, she takes all the information the families are willing to share.

“Where they’ve served, their rank, whether they’ve done one tour or two, or whether they’re just out of boot camp. We want them to share some of their funny stories.

“Then when we do the program, the families are introduced, and everybody is told where their loved ones are serving.”

The first year, the program was held at the Wauseon American Legion Hall. But they quickly outgrew that facility, moving instead to the VFW hall.

But it’s always been a joint effort.

Franks said, unfortunately, the group has had to give gold stars.

That first year, she said she received a call from the grandparents of a 19-yearold soldier who was killed by sniper fire.

“I could hear the fear in their voices as they asked, ‘do you do anything for gold star families,” Franks said.

“It puts a different twist on things.”

The grandparents received a gold star banner and a painting of their grandson, commissioned by an anonymous donor.

The second year, there was another gold star, this one for a helicopter pilot killed in a crash.

He was three weeks from retirement, and left behind a wife and two children.

His family also was honored with a gold star banner and a portrait, done by a local artist.

“It doesn’t get any easier,” Franks said.

At the presentations, Franks said all the families are introduced.

“We usually have a bag piper who plays. Last year, the American Legion Riders (a motorcycle club comprised of Legion members) made the presentation.”

As the bag piper was playing, Franks said they could hear the sound of the Riders’ motorcycles arriving.

“That alone was so emotional,” she said.

As each service member’s biography is read, Franks said the families feel a lot of pride and a lot of emotion.

“Most cry (because there are so many) people there (that) support them so overwhelmingly,” Franks said.

After the program, she said the families are encouraged to stay behind and meet other families’ members and supporters.

A reception line forms, and every family member has the opportunity to shake hands with the Legion Riders.

The cost of the banners is paid for by the two organizations.

“We want people to know that there are others who do care.”

Families who have a loved one serving in the armed forces and wish to participate in the banner program may contract Franks at 419- 335-6394.–David Pugh