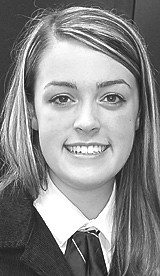 As you read this, Gretchen Lee, PHS ‘18 and Ohio FFA secretary, is on a trip that will eventually carry her to the nation of South Africa.

She leaves today, Wednesday, for New York City for a quick orientation before traveling to the African nation.

The trip, she said, “Is called the International Leadership Seminar for State Officers, also known as ILSSO.

“And hopefully, learn something about leadership along the way ourselves.

“We will have the opportunity to interact with some South African agriculture students, get to know them and what their stories are.”

She said those on the trip will have a chance to find out what South African students learn about agriculture in their schools.

In all, they will spend about two weeks on the trip, returning Wednesday, Jan. 16.

Lee said some places they will visit will differ from Ohio, but other places will be similar.

“In terms of the farms that we will be visiting, we will be going to an ostrich ranch, a dairy farm and alligator farm, some soybean and corn fields, a beef farm, and a potato field,” she said.

“Then we will be going to a private game reserve and some fruit exporters.”

While the FFA arranged the trip, Lee said she must cover the cost.

But she agreed the memories made on this trip will last a lifetime.