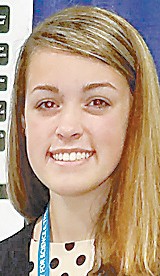 Gretchen Lee, a Pettisville High School student who starts her senior year in the fall, recently met with “the best student scientists in the world.”

Lee told the Pettisville School Board during its Monday, June 26 meeting about her May trip to the International Science and Engineering Fair in Los Angeles.

At the ISEF, approximately 1,800 students from 78 countries gathered to present their projects.

“I was there with the best student scientists in the world,” Lee told the board. “It was a humbling experience for me.”

She found the oil was effective in treating the parasite in their egg stage, killing the eggs within 48 hours of treatment.

Lee commended the school board for supporting science fair participation, saying it had been a very positive experience for her.

“I was able to network with others who have the same passions as I,” Lee said. “And it helped me become better at public speaking. I really learned a lot.”

“The food was free, the rides were free, and there were minimal lines,” Lee said. “It was great!”–D.J. Neuenschwander