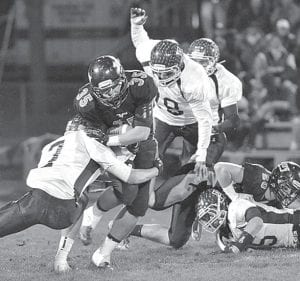 With a win, the Streaks could have clinched a firstround home-field advantage in the playoffs.

The Tigers needed the win to get into the playoffs.

Both squads finish the regular season with 8-2 records, 6-2 in the NWOAL.

After going three-and-out on their opening possession, the Streaks struck first on an 11-yard run by Evan Wyse with 2:03 left in the first quarter.

The Tigers used the ground game and the play of their offensive line to tie the score at 7 in the second quarter on a 2-yard run by Sean Westhoven with 10:21 left.

The making of a good oldfashioned shootout was in the works, but the Tigers’ defense took over in the second quarter, shutting out the Blue and Gold.

On the other side of the ball the Tigers, led by the power running game of Westhoven, scored 21 unanswered points for a 28-7 lead at the break.

Westhoven led LC’s ground attack, rushing for 148 yards on 27 carries and two touchdowns, including an 8-yard touchdown run in the second quarter with 6:20 remaining.

As a team, the Tigers ran for 250 yards on the ground. The Blue and Gold finished the contest with a negative 28 yards rushing.

Behind quarterback Evan Wyse, Archbold took to the air as the LC defense shut down the ground game. Wyse threw for 331 yards, completing 31-47 passes for one touchdown.

LC got the ball to start the second half. While neither team mustered any offense on their opening possessions, the Tigers caught the Streaks off-guard on their second.

Josh Drain spotted a wideopen Kaleb Pohlman on the first play from scrimmage for a 41-yard touchdown toss and a 35-7 lead.

Archbold closed the gap in the closing minutes of the third quarter as Wyse crossed the goal line from 1 yard out.

“We had three turnovers, and we can’t have those,” said Bryan Miller, AHS head coach. “That second quarter was not good.

“Liberty Center moved around so much on defense; that can cause confusion on our offensive line as far as who picks up who.

“We are a lot better on the line than what we showed tonight. I thought we would do better.

“I was pleased the way we played last year against them, and they didn’t do anything different this year. For whatever reason, we just had a harder time picking things up.

“I told the kids they have earned the chance to play in the playoffs, even though this loss is hard to look for the good in it.

“We will watch films, then flush it and season two starts.

“Everybody is equal in the playoffs. Our guys have to get their heads wrapped around that. It’s a new season and new challenges they have to go at.”