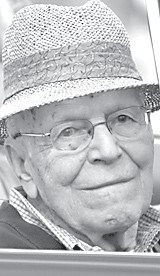 Lawrence E. Short, 96, of Archbold, was dismissed in peace to join his Lord and Savior a few minutes after midnight on Dec. 26, 2017.

He was the youngest and ninth child born to Melinda and Amandus Short on July 2, 1921. He was raised on the family farm west of Archbold.

He graduated from Archbold High School in 1939.

Lawrence was a lifelong resident of Archbold, with the exception of when he worked in a mental health facility in New Jersey as a conscientious objector during World War II.

He met Ruby while she was working at the original Home Restaurant. They were married in February 1942, and lived for over 70 years in their home on Vine Street, where they raised their four children.

He is survived by a daughter, Sally Collamore, and sons Sidney (Rebecca) and Eric (Barbara).

Lawrence Short served two terms as mayor of Archbold, from 1963-1971, and was also a member of village council. Throughout his life he was active in Rotary International and many other civic organizations. He was always a strong advocate for the Village of Archbold.

He was a lifelong active member of Archbold Evangelical Church.

Friends may call at the Fairlawn Chapel on Thursday, Jan. 4, 2018, from 3-8 p.m. Private interment will be in the Archbold Cemetery.

A memorial service is being planned for May 2018.