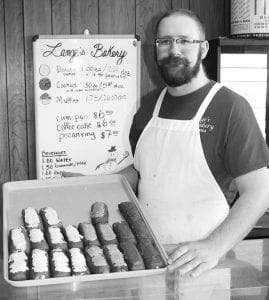 Jacob Thatcher, the new owner of Lange’s Bakery, with some baked goods from the bakery. Thatcher said the business will continue under its current name. He is an Archbold native and 2007 AHS graduate.– photo by David Pugh

Thatcher said Lange is a family friend. When he learned Lange was interested in selling the long-time Archbold business, he approached him about it.

The sale became final Tuesday, Jan. 1. Terms of the sale were not announced.

Thatcher said he worked in the bakery for about a year to learn the business. The bakery employs five people.

Thatcher said he is enjoying the work.