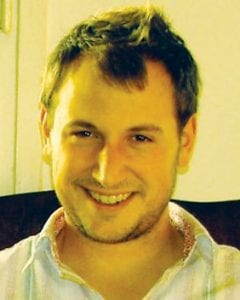 “Since I’m the only MCC worker in the city, it really hasn’t been too difficult fitting in,” Lane said.

“People already ask me for directions. They don’t realize until I speak that I’m not a native, and sometimes, not even then.

“The closest MCC worker is a five- to seven- hour bus ride away, and the MCC regional office is in Sarajevo. I stay connected by Internet,” he said.

Lane left Archbold on Oct. 19, 2008, for a two-week orientation at MCC headquarters.

Since arriving in Serbia in November, he’s learning the language in addition to doing the job MCC sent him to do.

“Fluency is a tricky word,” he said, when asked about the language.

“They speak Serbian here. It’s a Slavic language which has a different syntax, grammar, and alphabet from English,” he said.

He’s been told his Serbian is good, “but I feel like I have a lot more to learn,” Lane said.

Lane’s mother and father, Wanda and Bret Stopher, Archbold, visited him at Christmas.

Lane’s Serbian was good enough to get them around.

“Although we did end up with head cheese at the open air market that we really hadn’t ordered,” she said.

About 50% of the people have some English capabilities and are eager to practice.

“On the other side, it makes it hard for me to practice Serbian when everyone wants to speak English to me,” Lane said.

Novi Sad is the secondlargest city in Serbia. Belgrade is larger.

The number varies because the last census is over 10 years old.

Plus, following the recent wars, a large number of refugees and displaced persons came to the city, and many haven’t been counted.

Despite the size of the city, he still hears about it when Americans and Canadians are in town.

As an MCC representative, Lane works with a local Serbian organization called The War Trauma Center. The center provides psychosocial support to veterans who fought in the wars in the former Yugoslavia in the 1990s.

“In total they’ve been working in the region 10 years,” Lane said.

“As time has gone on, they built toward a peace-building perspective by working on stabilizing family and community connections in the region.”

The counseling center uses young professional volunteers who provide counseling for veterans and the local population.

The third program is called constructive usage of veterans’ experience.

“This is done through veterans we work with,” Lane said.

“If there are veterans that seem to be more suited for working toward peace, they work with area youth and talk about what it meant for them to be in the wars.

“It helps to lessen violence among teens.”

There are differences between life in Archbold and life in Serbia, but also similarities.

“It looks a lot like Northwest Ohio,” said Wanda.

The climate is similar to Northwest Ohio, but milder.

The Serbian diet is also similar, with lots of meat and vegetables, Lane said.

Serbians tend to eat more in-season food. For example, strawberries are scarce this time of year.

“Buying at the open market is common,” perhaps more common than visiting a supermarket, he said.

“It’s also fairly common to have a barrel of sour vegetables fermenting somewhere in your house,” said Lane, who now has his own barrel of tursija, (pronounced tershe a), a traditional Serbian dish, in his home.

It was disconcerting for Bret and Wanda to send their son to Serbia for three years.

“It helps to connect with him through Skype” on the Internet, she said.

“When we visited him at Christmas, we weren’t there 15 minutes before his neighbors– a grandma who lives next door and her daughter who lives across the street– appeared, and we got there late at night,” Wanda said.

“They wanted us to know that the Serbians are good people and that, ‘We watch out for Lane.’”

Wanda said, “It made me feel good knowing he had good people around him.”

over the Internet) Vegetables, including cabbage,

Mix water with salt and sugar and dissolve. Add vinegar.

Mix Vinobran in a small glass of water. After it dissolves, add to water mixture.

Put vegetables into a fermenting container.

Pour in liquid; make sure all of the vegetables are covered. Add more liquid if necessary.

Cover with plate and weight to insure vegetables remain covered. Store in a cool to warm temperature, depending upon the amount of fermentation desired.