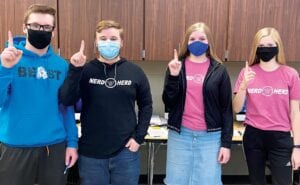 Speaking at the Tuesday, March 2, school Board meeting, Lane said the junior varsity team was named both league and tournament champions in the Northern Buckeye Academic League.

The varsity team was the undefeated league champion. The tournament for that group begins next week.

The Jesse Brown Small School Invitational was an invitation-only tournament where Pettisville competed against the best small schools in the nation. They finished 10th out of 24 teams.

The second tournament was sponsored by the Minnesota Quizbowl Alliance with teams from Illinois, North Carolina, Michigan, Alabama and Wisconsin.

Pettisville has qualified for Nationals for the fourth consecutive year. The national tournament will be held online in April.

Lane congratulated the quizzers and their coaches, Rebecca Dorosz and Andrew Switzer.

The board recognized Dorosz and Lyla Heising for their work organizing a spelling bee for Pettisville schools.