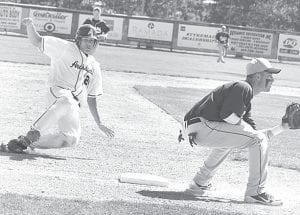 The Archbold varsity baseball season came to an end in the Division III district semifi nals when the Lake Flyers dismantled the Streaks 10-1, Thursday, May 17, at Defi- ance High School.

Lake (23-5) scored an unearned run in the first inning and then broke loose for five runs in the second to put Archbold in a big hole.

The outstanding Flyer defense was not about to let that lead slip away, and their offense added four more runs over the last four innings as they pounded out 14 hits for the game.

Archbold (16-13) could only come up with four hits and one run for the game after winning a sectional championship for the third straight year.

T. Wyse, finishing a standout three-year varsity career, ended as the team’s leading hitter with a .426 batting average, and was one of the top defensive catchers in northwest Ohio.

Evan Wyse attempts to tag the runner out at third.– photo by Mario Gomez

He also led the team in doubles, with 12, and was second in runs batted in, with 23.

Tyson Dietrich, a junior, led the team in RBIs, with 25, and in home runs, with three, while hitting for a .359 average.

“I couldn’t be prouder of this group of seniors,” said Dick Selgo, head coach.

“They set a tremendous example for our younger players by their work ethic, their attitude, and their character.

“We went through a very tough stretch with some very gut-wrenching one-run losses toward the end of the season. They never flinched.

“They showed all of us how to deal with adversity, and they will carry that over into life beyond high school sports.”

Michael Walker, a junior, had the second-highest batting average at .362, and led the team in earned run average on the mound with a 2.15.

Taylor Price, a junior, had the second-best ERA with 2.80.