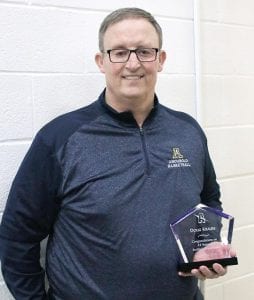 Doug Krauss, former AHS head boys basketball coach, was recognized for 34 years of service to the Archbold varsity basketball program prior to the Blue Streaks’ varsity game with Defiance, Saturday, Feb. 16. His teams won 18 Northwest Ohio Athletic League titles, 24 sectional tournament titles, 10 district titles, five regional titles, and one state runner-up title. He led teams to the Final Four in three different decades and made three Final Four appearances in a four-year span from 2003-06. Among his accomplishments, he was named the Ohio High School Basketball Coaches Association Division III Coach of the Year in 1996 and District 7 Coach of the Year five times. Krauss finished with an overall coaching record of 563-219, which places him in the top 25 in the history of boys basketball in Ohio. He will be inducted into the OHSBCA Hall of Fame in April. More than 70 current and former players joined Krauss at center court for the presentation (see back page).– photo by Mary Huber