by Andrea Kelley
Special To The Buckeye 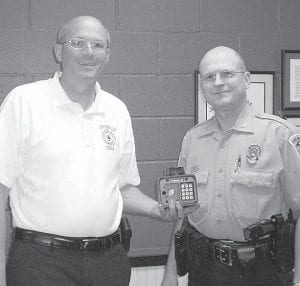 Or that you’ve fallen and can’t get up, but your door is locked and no one can get in to help you.

For some, it’s a real worry.

What if something goes wrong, and the fire or police departments can’t get in the house?

The Knox Box program consists of two parts: the fire/police department side, and the residential or business side.

A resident or a business owner purchases a Knox Box, which holds the key to their home or business.

The box is installed on the outside of their business or home so that police officers and firefighters can easily access it in case of emergency.

A master box is installed in each police vehicle and fire truck.

Each box contains one master key.

The key opens every Knox Box within the village of Archbold and German Township.

In the event of an emergency, any police officer or fireman has the ability to open the Knox Box on any building and access the building through a proper door, thus keeping all doors and windows intact.

In one instance, Schmidt said a motion sensor inside a business was set off. He couldn’t gain access to the inside of the building, and had to wait until an employee arrived with a key.

Had the business been using the Knox Box system, Schmidt could have used his master key to retrieve the key to the business, and gained proper access to the building in a matter of minutes.

Brodbeck agreed, saying the fire department doesn’t have the luxury of waiting outside when there is a fire. Circumstances force them to resort to breaking a window or door to get the team inside.

While unavoidable, it means that the damaged property has to be repaired, which can be expensive.

Though there are benefits, some may be skeptical.

Any member of the AFD and APD has access to every Knox Box under the departments’ jurisdictions.

Is the system really secure?

Each police officer or fire- fighter has his own personalized code.

His code must be entered on a keypad to open the master box in emergency vehicles to release the key.

The box records the code and the time.

Once the key is removed, a light on top of the box begins flashing, alerting others that the key has been removed.

After the key is placed back in the box, it automatically locks and the light stops blinking.

When a member of the department puts the residence or business key back in their personal box, either the owner of the building or two other members of the squad must be present to witness the key being returned and the box being locked.

Schmidt said this protects the safety of the buildings and the integrity of the officers.

Brodbeck and Schmidt said the AFD and APD have been aware of this system for years, but didn’t know if there was a high demand for it.

After several businesses contacted them about holding keys, they decided to implement the system.

Archbold will become one of over 9,500 Knox Box systems in use across the nation.

Wauseon has used the system, and said it has been successful.

Those who install the boxes should contact AFD or APD.

“Businesses will be receiving information from the fire department,” Brodbeck said.