by Andrea Kelley
Special to the Buckeye 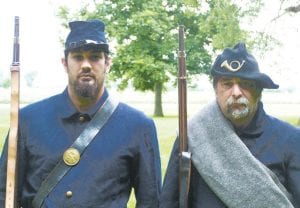 Wade Knipp, and father Steve, in their civil war uniforms. They are Civil War reenactors who participate in restaging battles of the war. The Knipps have a link to the war– Steve’s great-great grandfather was a soldier at the Battle of Gettysburg.– courtesy photo

If you had been in Gettysburg, Pa., from July 1-3, 1863, you would have been surrounded by men in uniforms, the sound of gun and cannon fire, and the explosion of shells in the midst of the Battle of Gettysburg, one of the most important battles of the Civil War.

And if you were Steve and Wade Knipp, you would have been two of the men in uniforms.

The Knipps, rural Archbold, are a father-son team of Civil War reenactors.

A few times a year, they participate in weekendlong Civil War reenactments across the country.

Their most recent adventure was this month, when they participated in the 150th anniversary reenactment of the Battle of Gettysburg.

The Battle of Gettysburg was notable for two reasons.

It was the farthest the Confederates made it into the north, and it was also a turning point in the Civil War.

The Confederates were defeated there, and from then on it was a losing battle for them.

In honor of this important anniversary, two reenactments took place this year.

A reenactment was held on the actual 150th anniversary, an affair more catered to spectators and the public.

A week prior, however, was a more serious reenactment, more for the reenactors than their spectators.

The Knipps participated in this one.

The men wear their own authentic reproductions of the wool uniforms and use authentic weaponry, firing blank charges, of course.

They are divided into regiments of cavalry and infantry, who get together and reenact certain segments of Civil War battles.

They camp using tents and equipment just as the soldiers had in 1863, eat similar food, and are given the same commands as the Civil War troops received.

“It’s structured just like the military was back then in the 1860s,” Steve said.

The biggest local reenactment takes place in Jackson, Mich., and is usually well attended. Most reenactments, however, take place in the east or in the south, where the Civil War had a larger impact.

Though they happen near the historical locations, the battles rarely take place on the actual historic battle sites.

Instead, they are reenacted in a large field somewhere nearby, and are attended by 50 to a few hundred reenactors.

Steve “fought” on the North side in the much larger 125th and 150th anniversary battles, which had around 10,000 people registered to participate.

Reenacting is more widespread than most people realize.

Describing the other men in his regiment, Steve estimated that “there are probably

20 guys within 50 miles” who participate.

It is easiest to find a regiment by word of mouth, but many websites and articles in Civil War magazines provide information about where to find reenactment regiments and how to join.

Steve has been involved in Civil War reenacting for 30 years.

He’s always enjoyed the history of the Civil War, finding it fascinating.

His great-great-grandfather, originally from the Ridgeville Corners area, was a member of the 107th Ohio Voluntary Infantry and fought in the actual Battle of Gettysburg.

About 30 years ago, the reenactment regiment Steve and Wade belong to fizzled out, and its members were trying to revive it.

Steve heard of it through word of mouth and decided to join.

He’s been a part of it ever since.

He enjoys it, and as Wade grew up, he was somewhat forced to enjoy it as well, participating with Steve in a few smaller events over the years, and, of course, the 150th anniversary battle.

An added bonus to being a Civil War reenactor?

Sometimes they get used as extras in movies.

Steve and members of his regiment have been in the movie Gettysburg, as well as the mini-series “North and South.”

Steve’s favorite event is reenacting Pickett’s Charge in the Battle of Gettysburg.

Pickett’s Charge is named after George Pickett, a major general who led the Confederate troops.

In Pickett’s Charge, Confederate troops began their march across about a mile of open field toward the Union line about 2 o’clock on the afternoon of the last day of the battle.

They marched into murderous Union rifle and cannon fire.

The Confederates broke through the Union lines, but were eventually thrown back.

Out of the 12,500 Confederate soldiers who started the walk across the field, less than half returned.

Every other man who participated was either killed or wounded.

Steve enjoys reenacting it because it is simply a large mass of people.

“Without being there originally, it’s the closest you can get to recreating that scene,” he said.

Part of the fascination comes from the fact that, even when facing what became a suicide mission, the Confederate soldiers obeyed orders without argument.

“It’s interesting that that many guys could be ordered to do what they did and just did it without question, even with kind of knowing what was going to happen,” Steve said.