Kinsman To Be Inducted Into Hall Of Fame 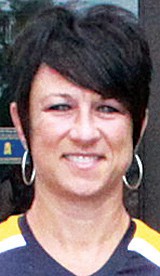 Rachel Sauder-Kinsman, head cross country coach and assistant track coach at Archbold High School, will be inducted into the Ohio Association of Track & Cross Country Coaches Hall of Fame, Friday, Jan. 26, at a banquet in Columbus.

Sauder- Kinsman, AHS ‘91, finished seventh, second, first, and first at the state cross country championships during her high school career, although she was disqualified her senior year over a uniform violation.

At Auburn University, she was the Female Athlete of the Year in 1996. She won All-American honors seven times– twice in cross country and five times in track.

She was also on a team that won its division at the USA Track & Field 5K Masters Cross Country Championships in 2014.

She ran professionally for 13 years.

In 2014, she said a high point of her career was when her team qualified to run at the World Cross Country championship in Portugal, where she earned a bronze medal for a third-place finish– even though it had been more than 10 years since she competed in a cross country race.