King Has Protected Children at Crosswalk For 10 Years 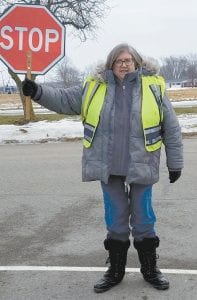 Armed with her handheld stop sign, Darlene King has been protecting children as a crossing guard for 10 years. The worst part of her job, she said, is rain. The best is her interaction with youngsters. She has handed out candy to students who tell her about a book they’ve read recently.– photo by Pam Graber

Caring for others is in Darlene King’s DNA.

Whether she’s serving as a volunteer caregiver, baby-sitting for her grandnephews, or cooking for the Zion Mennonite Wednesday night childrens programs, her joy in serving others shines through.

Her job as a crossing guard for the village of Archbold is a natural outcrop of that caring spirit.

Darlene and her husband, Jim, used to own Royal Images, a photo studio.

Ten years ago, “Martin Schmidt was the police chief, and he was out here at the studio getting pictures taken with his family,” she said.

As Schmidt was talking to her, he said, “I need to find a sub for (crossing guards) when people are sick or if they’ve got a family member that’s sick.”

“I didn’t hear anything from him for a while, and one day he walked in the studio carrying a stop sign on a stick,” Darlene said.

“I said, ‘When?’ And he said, ‘This afternoon. In an hour. Then go in and fill in your application, and fill out all your paperwork.’

“I started working as a substitute for whoever needed time.

“Mike Lindley had been on the corner of Pleasant and Lafayette at the tennis courts in Memorial Park forever. He got sick, and they just moved me into that fulltime.”

“The job gives me a chance to do other things during the day,” Darlene said. “I’m not tied down.

“It’s amazing how many people recognize me at my corner. I’ve had moms call me if I wasn’t there. They check up on me.”

Rain or snow, Darlene can be found on her corner twice a day.

“At the beginning of the year, I start earlier and end later until I know the kids’ routines.

“Rain is the worst ever. One year, it rained every morning and every evening for 10 days straight.

“You really can’t hold an umbrella and the stop sign. It usually takes both hands just for the sign, especially when it’s windy.

“Lafayette (Street) is a wind tunnel, and those signs really catch the wind. One time it caught, and it was icy, and I ended up on my butt.”

Darlene uses a few tricks she’s learned to stay warm when the weather turns on the wintry blasts.

“I sit in my car until I see kids,” Darlene said.

“I wear thermal long underwear, a couple sweaters, and a warm coat and gloves. It’s really not too bad, unless it rains.”

“We’re there all the time, just like the police.”

Since the crossing guards deal with schoolchildren on a daily basis, it would make sense that they would be employed by the school.

“We’re actually employees of the Archbold Police Department,” Darlene said. “We work on village property, so we’re employed and overseen by the police department.”

“My biggest scare is parents in the morning who are driving, drinking a cup of coffee, and are on their phones, all at the same time,” she said, adding, “and speeding.

“Nobody knows that it’s a 25 mile-per-hour zone.

“Last week, Leo (Wixom, police chief) stopped to talk to me, and his truck being there? Traffic was moving 25 mph.”

If she could tell drivers anything, it would be, “Slow down! There’s a reason that (the speed limit) is 25 mph. Pay attention! Get off your phones!”

Another pet peeve is parents who walk their children home, bypassing the crossing guards by taking Wilson Street out to South Defiance Street.

“It’s not teaching your child anything if you let them walk where there’s no crossing guard and no crosswalk,” Darlene said. “Safety first!”

Even with the trials, the kids make it all worth it for her.

“It’s been fun. I ask them how their day was, I celebrate birthdays with them, I even do book reports with them,” she said.

“Tell me about a book you’ve read, you get a Smartie (a small candy). I get all kinds of answers, too!

“You’ve got the Chatty Cathies, who’ll tell you everything they know, then you’ve got these boys that hardly say a word.

“I had one little boy like that and one day he said, ‘You haven’t talked to me in three days.’

“Some of these kids just need that. Someone they know cares.

“If I can make a kid feel good for a few minutes, that’s my job. If you can help kids, that’s the most important thing.”