Kids Show They Can Do Anything 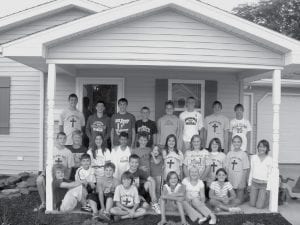 Who would have thought that fourth- through eighth-grade kids could build a new house- without power tools?

And maybe the most amazing part isn’t the fact that a bunch of kids built a new home- although you must admit, that’s pretty amazing.

Maybe it’s the fact that the opportunity started in Archbold Middle School, became a youth group project, and then grew into an effort of the entire community.

Or that the project was meant to be “some repairs,” but somehow escalated into a demolition project with a good old-fashioned, ground-up house-raisin’ ending.

But then again, maybe the most amazing part isn’t really an issue. 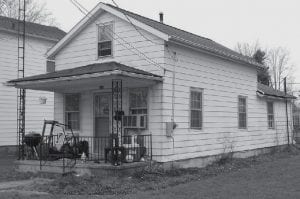 For many, seeing this house is strange- it doesn’t exist anymore. After years of frozen pipes in winter and cold water in summer, Chandler Stevens and his mother, Mary Austin, saw their home demolished and rebuilt, from a concrete slab to a new living space. – photo courtesy Lisa Allison

Groundbreakers youth wanted to help after hearing about the discomforts Chandler and his single mother encountered annually in their 204 East Williams Street home. The largest problem was inadequate heating, which meant frozen pipes in winter.

Lisa Allison, a Groundbreakers advisor along with her husband Mark, asked the group their opinion on raising money for what she called “some repairs” on Chandler’s home.

“They all wanted to do it,” she said. “They thought this would be a good way to use their time.”

Groundbreakers held a carnival, a work night at a local restaurant, wrote letters to church groups, and gave presentations at meetings of the Archbold Rotary and Lions clubs, along with the Sauder Woodworking Human Resources department, to raise the necessary $15,000 for the project. 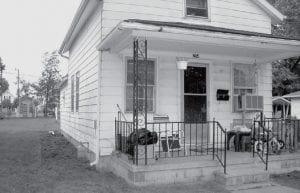 Middle schoolers in the Groundbreakers youth group made a lot more work for themselves when they decided June 8 to knock the house down instead of just completing some repairs. However, the youth knew they had no other choice if they wanted to help a friend. “We spent the whole summer, but it was worth it,” said Justin Allison, 14.- photo courtesy Lisa Allison

At the Groundbreakers’ request, Chandler’s mother, Mary Austin, provided a list of necessary renovations, like a knob for the back door, new furnace, and kitchen light.

Mary and Chandler moved from their home into an apartment, and the youngsters began work.

It soon became apparent the house needed more than renovations.

In fact, it made more sense to build new from the ground up. The Allisons pitched the idea of building anew to the kids after a June 8 baseball game.

Even with the massive undertaking, Lisa said, “All the kids were on board.”

By 7 p.m. the day after the decision to rebuild, there was nothing left of Chandler and Mary’s home but memories and forgotten relics found lodged in the foundation.

“It was kind of cool to watch the house fall down,” said Garrett afterwards. “But to see his mom (Mary) just standing there, staring, it had to be hard for her to watch her house come down to the ground, and not know what’s happening next.”

After a summer of hard work, Garrett Morton, left, Justin Allison, center, and Chandler Stevens can relax on the front porch of the house they helped build. “It’s cool to see the progress that’s gone on,” said Garrett.- photo by Alicia Buckenmeyer

“But,” Garrett said, “knowing what we’re going to do and how much better a new house will be- it was going to be good.”

The house took shape on June 28, known as “The Thursday.” Work began at 7 a.m. The first wall was up an hour and a half later.

That day, there was “a downpour, and we were all totally drenched,” said Drew Lange, 14.

That didn’t stop the kids, because when all 70 of the workers left after 10 p.m., the house was standing.

“They did it all,” said Lisa of the kids. “They put the walls up. They were here all day.”

“When you have (around) 40 people helping you, it’s not that bad,” said 10-year-old Erin Erbskorn, Groundbreakers member.

The day was meaningful for many kids, including Chandler, who worked beside his friends throughout the building project.

“I thought it was really cool, because it (the house) was a concrete slab at first,” said Justin. “We actually got to see the work coming together.” 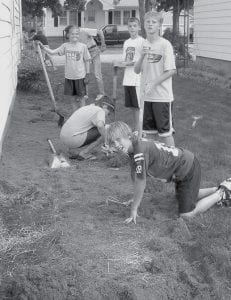 Caroline Vonier and Carson Riehl kneel to use hand tools, while Desi Newman, Bryce Tinsman, and Nick Cassidy, from back to front, are ready to dig with shovels. “We usually come out here almost everyday,” said Carson’s sister, Dakota, of the young workers. Now that the house is finished, the kids miss the daily work sessions.- photo courtesy Lisa Allison

The progress was more apparent after dry-walling. “You actually see the rooms and you can’t see through (the walls)” said Justin. “It actually feels like a house.”

Kids gathered daily to work. “All I had to do was make the phone calls,” said Lisa. “Kids always came.”

Whether the work was writing fund-raising letters, clearing debris, or painting, kids demonstrated “willing hearts, all it takes to do a mission project,” said Kevin Beck, an adult helper and Habitat for Humanity volunteer.

“We have goals that we set everyday,” said Garrett. His father, Kevin Morton, wrote the task list.

“It’s fun, and you know that something good’s going to come out of it,” said Dakota Riehl, 14, a last-year Groundbreaker.

The fact that countless kids described the project as “fun” may explain the motivation.

As Dakota said, “I get to hang out with friends more than I usually do in the summer.” 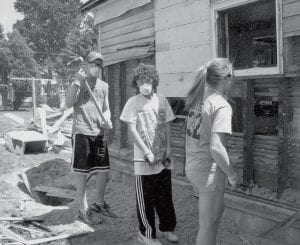 What’s the best part of building a tower out of blocks? Knocking it down, of course. Local youth participated in a large-scale demolition when they knocked down the home of Chandler Stevens this summer. From left: Garrett Morton, Chandler, and Caroline Vonier are ready with gear, dust masks and hammers.- photo courtesy Lisa Allison

Helping a friend provides another source of motivation- a powerful one.

They incorporated fun into everything, like the tiling race between the boys in the kitchen and girls in the bathroom.

He later created more excitement by accidentally breaking through an outside gas line.

The pipe, with “This is a gas line” written on it was given to Aaron afterwards, said Garrett. “Everybody gave him a hard time.”

Sometimes the work was more serious, like during the July 22 dedication ceremony at the church.

“I thought one of the coolest days was the dedication day when we handed them the keys,” said Justin, and seeing “how emotional Mary was.”

It was a celebration of the power people have for good. As Mark Allison prayed in the opening, “What we think we can’t do, you laugh at. You know we can do it.” 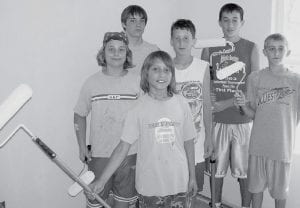 Above, the 62 kids who helped build a new home for Chandler Stevens and his mom had a huge to-do list. “Whatever needs to be done,” said Drew Lange, 14, far left. On July 9, priming the walls was what needed to be done. Front: Santos Quintanilla, 11; middle row: Lange; Tinsman; Justin Allison, 14; back row: Travis Roehrig, 14; and Clay Giesige, 14, prepare walls in Mary’s future bedroom.- photo by Alicia Buckenmeyer

“Everyone involved in this project was blessed only because Mary and Chandler were willing to let this happen,” said Kevin Morton, an adult helper on the project, at the July 22 new-home dedication.

“We spent the whole summer, but it was worth it,” said Justin from the microphone. “I’m really happy for Chandler and his mom.”

Now that Mary and Chandler have moved into their new house on East Williams Street, it’s meant an adjustment for the young workers.

“You’re just so used to coming here everyday,” said Garrett, sitting on the donated couch in Chandler’s new living room. “And then when it stops, you’re like, ‘What do I do?'”

Visits are even different. “It’s now a home,” said Lisa. “You can’t just walk in.”

The move was also an adjustment for Mary and Chandler- albeit a good one.

“It was weird sleeping in this house, because I wasn’t used to it yet,” said Chandler of his first night.

At left, building a house isn’t all work and no play- at least not with kids around! Desi Newman, 11, demonstrates the fun surrounding the home during the project.- photo courtesy Lisa Allison

“It’s getting better,” he said. 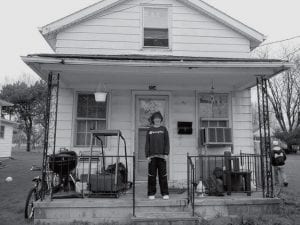 So many changes happened for Chandler Stevens this summer. For one, the house he lived in since infancy, above, was replaced with a new one, built by the hands of local youth. Two, his curly hair was cut when these young workers met the money-raising goal they’d set to fund the building project. Besides the hair, which Chandler can’t wait to grow out again, the summer was a great one. “It’s been cool building my own house,” the 14-year-old said.- photo courtesy Lisa Allison 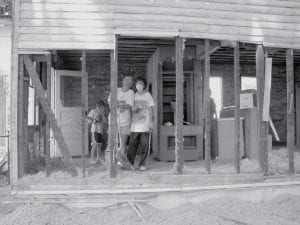 Mary Austin, left, grins beside her son Chandler through the frame of her old house being torn down around her. The two moved into their new house the end of July. So who knows? Maybe Chandler is smiling under the dust mask, too.- photo courtesy Lisa Allison 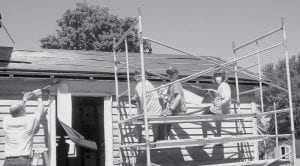 Every project has a start, and ripping off siding had to be completed before the house could come down. From left: Mark Allison, who, with his wife Lisa, is leader of the Groundbreakers youth group, pries at the house while Evan Wyse, Gavin Morton, and Krista Leupp work from the scaffold. “I’m really happy that we’re doing it,” said Gavin about the project.- photo courtesy Lisa Allison 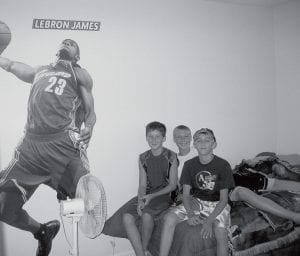 From left, Chandler Stevens, Garrett Morton and Justin Allison appear in the new bedroom they helped build for Chandler. The room is even decorated with LeBron James paraphernalia, just like Chandler wanted.- photo by Alicia Buckenmeyer