Kids Get Silly With String 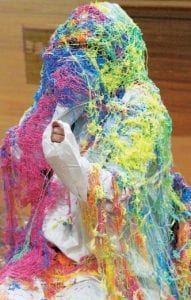 Left: Under the mass of Silly String is Dorothy Lambert, Archbold elementary principal, who promised her students if enough money was raised for the ABC 4 Maddy Foundation, she would let them shoot Silly String at her. Total amount raised for the “Blast Cancer” event was $4,133.56, a record. In six years the school has raised more than $19,000, which goes to organizations involved in childhood cancer. Right: “Blasting” and helping to blast are, from left, Mindy Gruenhagen, third grade teacher; Andrea Thiel, first grade teacher; Jason DeVries (with can); Libey Sauder, Lilli Dominique (with can), and Jennifer Burkholder kindergarten teacher.– photos by David Pugh 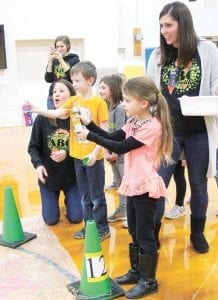