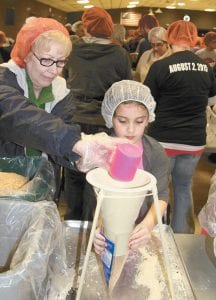 Volunteers of all ages were on hand Sunday, March 20, at the Archbold Knights of Columbus Rebeau Hall for a Kids Against Hunger packing event. About 90 volunteers packaged 20,000 meals of highly nutritious ingredients that will find their way to

Soon, people in Haiti will be able to sit down to a nutritious meal thanks to the efforts of about 90 volunteers in Archbold.

The Fort Wayne branch of Kids Against Hunger came to Archbold, Sunday, March 20, and packaged 20,000 meals in sealed plastic bags for shipment to the Caribbean nation.

Kristen Lauber, Archbold, put together the event, raising the $5,000 cost and recruiting volunteers.

Getting volunteers wasn’t hard, she said.

“People like to volunteer, they really do, especially for something like this,” she said. “I think it strikes a chord with people– you know, kids fighting hunger.”

There were a lot of children, some as young as 7 and 8 years old, working the “production” lines putting food into bags, and, the favorite job, hitting the bags at the end of the line to assure there were no leaks.

But there were more than just kids. Teens, young adults, and older adults all worked together.

“What I love about this event is it’s a great intergenerational or multi-generational event, because you can have a 5-year-old, a kindergartener, all the way up to a 100-year-old,” said Jana Thompson, director of the Kids Against Hunger, Fort Wayne satellite. 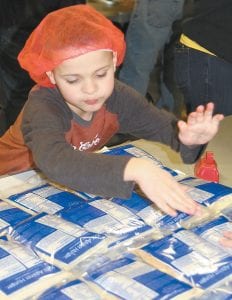 “The process is simple, easy to understand, and a lot of fun.”

“It does, kind of,” Thompson said.

“It’s a meal that has been scientifically designed by what I call the really smart people– the nutritionists.

“It has a vitamin and nutrient powder that goes in first, then it has dried vegetables, and then it has soy– that has protein, and then rice.

“All that gets put together in a bag or pouch that is sealed, then packaged into cases and onto pallets. One bag contains six meals.

“This particular packing is going to Haiti.

“Haiti right now is in desperate need of food. They’re in one of their worst food crises since about 2001. They’re in the middle of a drought that’s been going on for two or three years now.”

“Obviously, someone has to pay for that, so the person who hosts (a packing event) pays for the ingredients.

Lauber said she had volunteered at a packing event in Defiance. She met Thompson and another Archbold woman there.

“We just decided, ‘Why can’t we bring this back home? It’s an amazing event,’” Lauber said.

“We had various fundraisers. We had a spaghetti dinner.

“We had a dodgeball tournament that had police, fire and sheriff (personnel) involved.

“We had a painting class, so all of that’s coming together, and, of course, business donations and church donations, as well.”

Lauber said they were short of their fundraising goal, “but I don’t have any doubt we will reach that.”

Many of the younger children were enthusiastically pounding freshly packed bags, some with all their might.

One was seen showing off the red marks on his hands.

“Archbold is such a generous community, and Kids Against Hunger has been received very well,” said Thompson.

“I would anticipate once people have seen it in action, that when we do it again next year, you’ll have even more people volunteer.

“You know, there’s something about knowing you’re packing (a meal) for a child that gets a kid excited.”