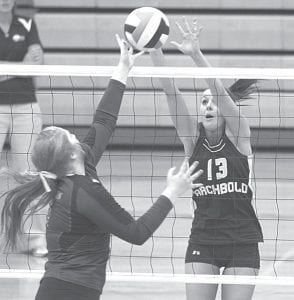 Rachel Brader attempts to block Kidron’s Makena Granger in the finals of the Streak Spiketacular.– photo by Mary Huber

The Comets have won the invitational eight times since it began in 1995, while Archbold has won nine times.

Antwerp is the only other team to have won a Spiketacular championship; the Archers won in 1997.

“Central had some big hitters, and we had a hard time stopping them after the first set,” said Kylie Rufenacht, AHS head coach.

“We also struggled with serve receive and made crucial service errors.”

Archbold led 23-16 in the first game when the Comets started to make a comeback. Makena Granger had a kill, followed by two straight aces to close the gap to 23-19.

Kidron had three straight kills– two by Sydney Mast and one by Marissa Krier– to close within 24-22, and Kylie Rufenacht, AHS head coach, called a time-out.

The Streaks came out of the huddle and finished the game with another Lehman kill for a 25-22 first-game victory.

Kidron took control in the second game as the Streaks had problems receiving the Comets’ serves. The score was tied at 2 when the Comets went on a 7-0 run for a 9-2 lead.

After a block of Granger’s spike by Darian Oberlin pulled Archbold to within four at 20-16, Kidron scored two straight points to lead 22-16.

Becca Gerig had a kill, followed by Oberlin blocking Kidron’s serve receive at the net, and the Streaks were back within four, 22-18.

Lehman’s spike went out, giving Kidron a 23-18 advantage. Oberlin had a kill and Lehman tapped the ball successfully to close within three, 23-20. Mast’s spike went long, and all of a sudden Archbold was down by two, 23-21.

Kidron’s John Finn called a time-out. The Comets finished off the game with consecutive Mast and Granger kills for the 25-21 victory.

The Comets controlled the third game from the start, taking a 2-0 lead and never trailing. They led by as many as 11 points, 21-10, and closed the game and match with an ace to win 25-13.

Gerig, Lehman, and Oberlin were named to the All- Tournament Team along with Granger, Mast, and Melissa Nussbaum from Kidron, and Ashley Mack and Hannah Reineke from Tinora.

The Streaks raised their Northwest Ohio Athletic League record to 6-0 with a three-game victory over Swanton (5-5, 2-3 NWOAL).

Gerig led AHS with 14 kills, while Taylor Coressel served four aces and had 15 assists. Desi Newman had 11 assists and six kills, Lehman had nine kills, and Oberlin had four kills.

The Wildcats (12-3) hosted Archbold, Thursday, Sept. 27, and the Streaks came home with a three-game victory.