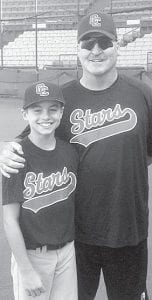 Kade Kern with one of his coaches, James King, a scout for the Los Angeles Dodgers who played professionally for the Dodgers and Chicago White Sox.– courtesy photo

The son of Keith and Kim, Archbold, Kade was one of 11 baseball players, ages 10-12, who participated in a unique experience.

They traveled to Puerto Rico, July 12-18, to play a series of games against a select group of Puerto Rican players.

Kade was the only player from Ohio selected to play for Coast to Coast Baseball during a tryout in Bowling Green.

Players from Mississippi, Tennessee, Illinois, and Michigan were among his teammates.

The team was led by a former Major League baseball coach and a former professional player.

“It was different,” said Kade. “We were (in Puerto Rico) for one week.

“My parents went and my grandparents and my uncle went. There wasn’t a ton of fan support, but there was some.”

The U.S. team was set to play a 10-game series, but rain forced the cancellation of two games.

Instead, the two teams played an eight-game series. The U.S. was victorious in six.

Games were played as doubleheaders every night starting at 5 pm.

“We played on one field, and it was a dirt infield, and the other field was a grass infield,” said Kade.

He played all nine positions. He pitched six innings but didn’t get a win or a loss. He batted .538, going 14 for 26 at the plate with two doubles, a triple and a home run.

Kade had the chance to live free of his parents during the trip.

“That was good! It was really fun.”

While the adults enjoyed the comfort of a tropical island, Kern believed his trip was positive.

“The island was kinda dirty, but it was cool.”