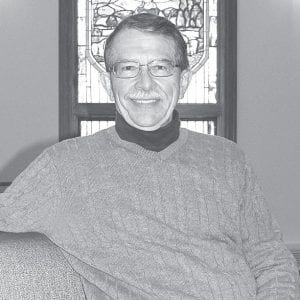 Dale Kern, pastor of St. John Evangelical Lutheran Church relaxes in a pew in the church sanctuary. After ministering to the congregation since 1975, he will retire in June 2013.– photo by David Pugh

When Dale Kern retires from his role as pastor of St. John Evangelical Lutheran Church in June 2013, he will have spent 42 years in the ministry.

Of those years, 38 have been in his current job.

Carl Hurst, Archbold, said he was confirmed by Kern in 1976.

“He has been an inspiration for many, many people. He inspires people by his strong faith,” Carl said.

Kern said he was raised on a farm in the Saginaw Valley of Michigan.

“I felt an urging in the fifth grade to be a missionary, to serve overseas. I always had a desire to be a pastor,” he said.

After that were two years each at Concordia Lutheran College, Ann Arbor, Mich., and Concordia Senior College, Fort Wayne, Ind.

That was followed by three years at the St. Louis (Mo.) Seminary, plus a year of internship.

When he graduated in 1971, there wasn’t money available in the church synod, or administrative body, to send him overseas.

Instead, he became a “worker priest” in northern California.

Living in the mountains at an elevation of 4,500 feet, he worked 40 hours per week at a lumber mill, and served two small churches.

“When the weather turned bad, I would put chains on my car. We had 10 feet of snow a year,” he said.

Their second child, Andrew was born in California in 1974.

After four years of living in the mountains, it was time for change.

Kern said he and Marcia had family in Michigan, Ohio, and Indiana they wanted to see. They were isolated in northern California.

Plus, he wanted to become a full-time pastor.

“I wanted to do more things with people, and not so much with machinery,” he said, speaking of his job at the lumber mill.

When a Lutheran church is in need of a pastor, it receives a list of names. The church selects a man from the list and issues “a divine call.” (Only males can be ordained pastors in a Missouri Synod Lutheran church.)

The role of the church, Kern said, is to attend to the spiritual lives of its members, keeping them connected to Christ.

“Honoring Him, worshiping Him, both publicly and privately,” he said.

Another role is sharing God’s love through Christian service in the community and within the family.

The church has a twofold job: helping people grow spiritually, as well as emotionally and physically.

Kern said he hasn’t kept track of the number of couples for whom he has presided over at their weddings.

Today, he said he is baptizing the grandchildren of couples he’s married, and confirming those children.

The church confirms children when they’re in the eighth grade.

“It gives you a strong generational feel,” he said.

When he baptizes, then confirms children of the same family, it’s a sign of a commitment by that family to the church.

“I’m honored to be part of their lives,” he said.

Kern said he sometimes gets emotional, because he is connected with the families, “good times, and some really tough times.

“That’s a really hard part, as you know these people more and more, to control your emotions publicly.

“Laughing is not a problem. It’s the crying that’s an issue, when things happen in people’s lives.”

“It’s not easy to minister to people when they are struggling, because you are struggling with them, but that’s when you are really needed,” he said.

“When people call on you as a pastor to be their spiritual leader, that is a fulfillment of your call.”

When he is troubled, “I just ask the Lord for strength. That’s my coping technique. It’s called prayer.”

Kern said when he started in 1975, average attendance at St. John Lutheran was about 150.

“We deal mainly with the family. My concept is if you have a strong family, they will minister to each other. People caring for people, taking care of each other’s needs by being a Christian disciple, at work, at home, at school… wherever they are.”

Much of the work of a minister is done outside the church, Kern said, and others agree.

Others praise Kern as well.

Sue Hurst, a church member from rural Ridgeville Corners, said her husband, Steve, grew up in the church, and was baptized there.

Kern, she said, “is a wonderful, influential, spiritual man. He sets a good example, is a good parent, and is a community leader.

“He is a shepherd who has led us all through tough times.”

After Kern retires, “We will definitely miss him,” Sue said.

Mary Grime, Archbold, an organist at the church for 65 years, said Kern has been very easy to work with.

“He’s always been organized. He will give me the schedule for the whole year.

“He was raised on a farm, so this community suits him.

Kern’s plans are to retire at the end of June, but beyond that, he and Marcia have no plans other than moving into a home in Archbold.

When he retires, he will miss his work.

Kern said he enjoys every part of his position.

“I’ve been fulfilled in many ways, and I enjoy working with people, building their spiritual life,” he said.

“That will be missed.”