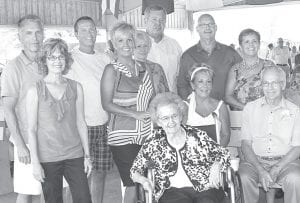 Herman and Kathryn Kauffman, Archbold, were named king and queen of the 55th annual Fulton County Fair Golden Wedding Party, Sunday, Sept. 1. With them are their children (with spouses), from left: Steve and Jennifer Kauffman; Jack Young and Debra Kauffman; Barbara and Phillip Kauffman; Jane (seated behind Kathryn) and Ron Yoder; and Janice Andrews.– photo by Mary Huber

Kathryn was the former Kathryn Lederman, of Leo, Ind.

The couple met when a “whole bunch of Archbold men courted a bunch of Indiana girls,” said Jennifer Kauffman, the couple’s daughter-in-law.

According to a letter written by Dale Wyse some time ago and provided by Jennifer, “And it came to pass in those days there was a great need for wives for the Sons of Menno who dwelt in Fulton County.

“Then the Word of the Lord came unto them that there were many young girls in the Land of Leo near Fort Wayne, Ind., who would make excellent wives…

“When these young men first came to Leo there was much cause for alarm among the parents of these young girls, for they had to put up with much foolishness as they sought out wives from among those available…

“And so it was that they all got themselves wives of the granddaughters of Peter C. Liechty, and returned to the land of their inheritance and there prospered and rebuilt the cities of Archbold, Pettisville, and Wauseon.” 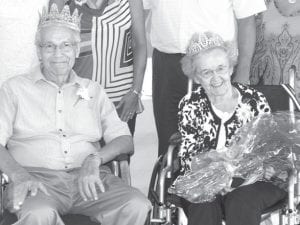 Herman and Kathryn Kauffman, Archbold, are crowned the king and queen of the Golden Wedding Party at the Fulton County Fair, Sunday, Sept. 1.– photo by Mary Huber

Herman was a farmer who raised dairy cattle, turkeys, and hogs. Kathryn worked as a housekeeper at Fairlawn Haven Nursing Home; she also worked at the Lugbill Bakery in Pettisville.