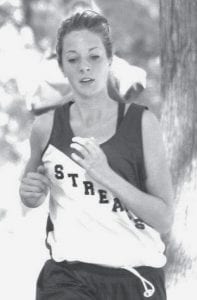 Katrina Gobrogge runs to seventh place in the district meet. She is Archbold’s sole runner to advance to regionals.- photo by Collin Wagner

She placed seventh in the Div. III District 2 girls meet, Saturday, Oct. 20, at Ottawa. The top four teams and individuals not on a qualifying team who finished in the top 16 advance to regionals.

The AHS boys placed ninth with 254 points in the Div. III District 1 meet. Delta won with 50; Fayette was second with 67; Stryker was third with 78; Antwerp placed fourth with 93.

The AHS girls finished eighth with 196. Fayette won with 37; North Central was second with 57; Tinora placed third with 102; Lima Central Catholic was fourth with 113.

In the boys race, the first Archbold runner to cross the finish line was Brian Grime. He placed 43rd in 19 minutes, 19 seconds.

“Katrina was not about to miss another trip to the regionals. She surprised everyone by besting her ninth-place finish last year with a strong seventh.

“I am very proud of the work ethic and character of this year’s team. They are a great group of athletes and have been a pleasure to coach.”

K. Gobrogge runs in the regional meet at Tiffin’s Hedges Boyer Park, Saturday, Oct. 27, 11:05 am. She must finish in the top 16 to advance to the state meet.