Drive past Larry and Marilyn Kammeyer’s house on the north corner of Monterey Court and La Choy Drive, and you can’t help but notice Marilyn’s flowers.

A sea of red blooms in front of the house. Out back, are different flowers, ranging from small to tall, with a brick walkway winding through them.

“I’ve always had flowers,” but they have changed “over the years,” she said.

Originally, there was a large vegetable garden in the back yard, but that went away when their children grew up and moved out on their own.

“Larry won’t eat anything I can (preserve),” she said.

When Larry was growing up, his family always had a large vegetable garden. He apparently had his fill of home-grown vegetables.

Marilyn’s flowers are mostly perennials, which come up year after year.

It is a lot of work to maintain them. On Thursday, July 24, she’d been outside four to five hours “deadheading,” or removing dead blossoms from the plants. 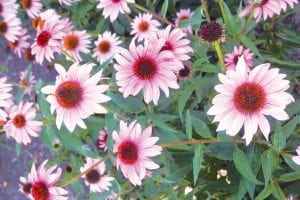 Shown are some of the flowers in Marilyn Kammeyer’s garden at her home on Monterey Court. While they are a lot of work, Kammeyer said she likes flowers and has always had them. The pot at bottom right, with red, white, and blue flowers, was put together in honor of her grandson, Luke Kammeyer, who is in the Navy stationed aboard the aircraft carrier George H.W. Bush.– photos by David Pugh

“You can’t even see where I’ve been,” she said.

But it’s not that many hours every day.

She said she receives compliments on her flowers.

One day, she said she was watering her flowers when a man drove by, turned around, and came back.

“He said, ‘I had to stop and tell you how nice your flowers look.’”

When asked why she took on all the work of maintaining her flower garden, she simply said, “I like flowers.”– David Pugh 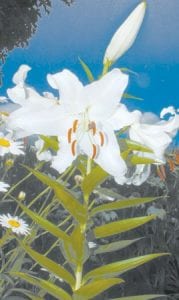 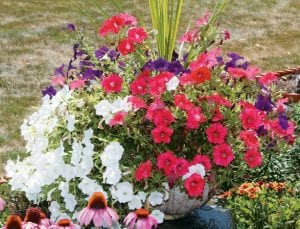