AHS Claims 66-64 Victory In Clash With The Titans 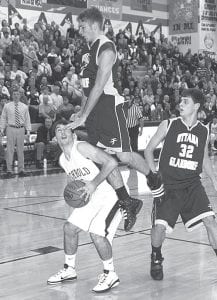 Ottawa-Glandorf’s T.J. Metzger hangs in the air before falling on and fouling Archbold’s Clay Giesige, Tuesday, Dec. 28 in a non-league matchup.– photo by Scott Schultz

Two of the premiere boys basketball teams in northwest Ohio clashed on Tuesday, Dec. 28 in The Thunderdome at Archbold High School.

The visiting Ottawa- Glandorf Titans rolled into town supporting a 6-1 record. Their lone loss was to powerhouse Bowling Green.

With the score tied at 64 and 1.5 seconds left, Garrett Morton inbounded the ball at the far end of the court with a perfect pass to Luke Kammeyer, who was waiting at the Archbold foul line. Kammeyer hit a deuce at the buzzer to seal a 66-64 win and up the Streaks’ record to 8-0.

“I told our guys before the game, I don’t know what is going to happen as far as who wins or who loses. But it will be two teams that will compete hard.

“It will be games like this that will help both squads down the line.

“Luke (Kammeyer) is starting to come, and when you play with confidence that certainly helps. He can be a load down there, and he came in big for us tonight.” Streaks Lead 34-33 At The Half 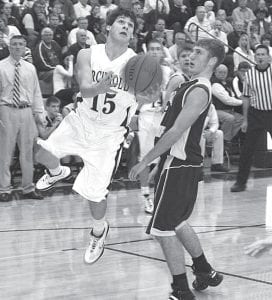 Telly Fricke (15) puts a move on a Titan and drives to the basket. Fricke led the Streaks with 19 points in their 66-64 victory.– photo by Scott Schultz

The first half had six lead changes.

Morton led the charge for AHS with 13 first-half points and finished the game with 15, as the Streaks put four in double digits to secure the win.

The squads played an even first half with Archbold leading 16-15 after the first eight minutes. With six seconds left in the second quarter Fricke hit a pair at the charity stripe for a 34-33 lead at the break.

Fricke was perfect from the charity line on the night, going 10 for 10, including 6-6 in the closing minutes of the game.

“Archbold made every free throw at the end and we didn’t,” said Josh Leslie, OG head coach. “You can’t do that on the road against good teams.” OG Takes The Lead

Garrett Morton penetrates through the OG defense for an uncontested shot. The Blue Streak senior scored 15 points in the victory.– photo by Scott Schultz

OG came out on fire to start the second half, scoring the first seven points. Drew Ellerbrock scored two of his 16 points on a put-back, Landon Pothast scored with a drive in the paint and hit one from the charity line, and Ellerbrock hit again on a three-pointer.

The Streaks turned the ball over on four straight possessions and a pair of misses by Fricke and Tyson Dietrich.

Kammeyer finally broke the drought at the 4:15 mark of the third, scoring a conventional three. Frank buried a three-pointer, and Kammeyer connected again from the free-throw line for a tie at 41.

“Zeb (Frank) is a great threat, and it makes teams guard the whole floor,” said Krauss.

“Zeb hit some big threes because we would get lost guarding him,” said Leslie. “It seemed every time Archbold needed a three to tie it or go ahead he would hit one.”

Tanner Wyse added a pair at the charity stripe to give AHS a 43-41 lead with 50 seconds left in the third.

The Titans carried a onepoint lead into the fourth when Travis Schomaeker buried a three at the buzzer for a 44-43 advantage. Buzzer-Beater

Morton put the Streaks on the board first in the final quarter, taking a Kammeyer dish-off for two. Schomaeker, who scored 13 on the night, answered with back-to-back buckets.

AHS scored the next seven points for a 52-48 lead.

The two teams went back and forth, and behind the foul shooting of Fricke, AHS led 64-61 with 18 seconds left.

In steps John Lammers for OG. A 5-foot-6 junior, he nailed his second trey of the night to tie the score at 64, sending the OG fans to their feet.

Krauss called a time-out with 1.5 seconds left. To win in regulation, Archbold would have to go the length of the court in those 1.5 seconds.

Looking like the First Team All-Ohio quarterback he was in football, Morton inbounded the ball and threw a perfect pass to Kammeyer, who was at the foul line on Archbold’s end of the court.

Kammeyer turned and dropped in the deuce as the Archbold student section chanted “Kamo, Kamo.” The OG bench stood stunned as the scoreboard with all zeros on the clock had the home team winning 66-64.

“That last one was on me,” said Leslie. “I should have called a time-out after I saw Archbold’s set, to set up our defense. I take the blame for that.”

“We knew exactly what play we were going to run,” said Krauss. “I would rather not have to run that play, but OG hit that three to tie the game. That is the only play we have been practicing.

“We might have been a little lucky, but luck happens when you prepare for it, and we were prepared.”