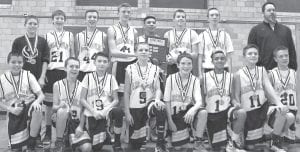 Archbold finished the season with a perfect 19-0 record after competing in the NWOAL tournament last week.

The Streaks battled Delta, Tuesday, Feb. 2. Archbold got off to a hot start, taking a 28-2 first-quarter lead. The Streaks went on to post a convincing 63-12 victory. Trey Theobald led the way with 13 points. Caleb Hogrefe and Noah Gomez combined for 21.

In semifinal action, Thursday, Feb. 4, Archbold faced Liberty Center. Archbold held a slim 19-17 lead going into the locker room. The Streaks pulled away in the second half to come away with a hard-fought 45-28 victory. Alex Roth bucketed 7 points.

The championship game had Archbold facing Wauseon, Saturday, Feb. 6, at AMS in front of a packed house. The first half was a defensive battle as the Streaks were down 13- 10 after two quarters. Archbold won the second-half battle 21-10 take a 31-23 victory. Antonio Cruz, Brandon Taylor, Kobe Kennedy, Roth, Gomez and Theobald all hit the scoring column.

Archbold played in the NWOAL tournament last week and won their first game over Swanton, Tuesday, Feb. 2. Archbold led 33-0 at halftime and the final was 52-4. Noah Garcia notched 15 points while Elijah Zimmerman added 8 and Matthew Gladieux, 7.

The second-round game took place on Thursday, Feb. 4, against Bryan. Archbold led 26-13 at the half and claimed a 46-28 victory. Isaiah Gomez was the high scorer with 10 points followed by Zimmerman with 8 and Kade Kern with 7.

The finals pitted a rematch with Wauseon on Saturday, Feb. 6, in Archbold. Archbold was 18-0 while Wauseon was 16-1, with their only loss to Archbold in December. The score was tied at the half at 19 and after three it was tied at 27. Wauseon got revenge and pulled out a 39- 34 victory. Gomez was the leading scorer with 11 points. Zimmerman had 8.

Archbold finished 18-1 and was NWOAL runner-up.

The Streaks traveled to Patrick Henry for the NWOAL tournament, Tuesday, Feb. 2. The Streaks were the seventh seed and faced second-seeded Patrick Henry. In an exciting game, the Streaks tied the game at 20 with one minute left. However, the Patriots came away with a 23-20 victory.

Leading scorers were Sauder with 10 points and Jensyn Robinson with 7.

The Streaks ended with a 4-11 record.