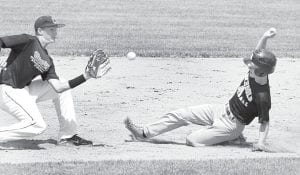 Archbold’s Isaac Petersen attempts to steal second, but Coldwater second baseman Jack Hemmelgarn makes the tag in the third inning in the first round of the state tournament, Saturday, July 20.– photo by Mary Huber

After losing to Anthony Wayne twice in the regional tournament, Archbold (21-7) defeated the Generals to advance to the championship game of the Junior Acme baseball state tournament, Sunday, July 21, in Bryan.

The Streaks scored two runs in the top of the first inning, led 10-3 after five, and held on for an 11-8 victory to stay in the winner’s bracket of the double elimination tournament.

Beating the Generals after losing to them twice the weekend before “was awesome. It was awesome,” said Derric Martinez, Archbold head coach.

“They’re still in the Acme tournament, so some of their kids are up (playing Acme). Still, beating that team…it’s a Division I school. We’re Division III, along with Coldwater.

“It was a huge win, a huge confidence booster for us. We needed that. They did beat us twice in regionals, but we hung with them both games (losing 2-1 and 7-4).”

The Generals, who won the North regional, dropped into the loser’s bracket, where they defeated Coldwater 11- 1 to set up a rematch with Archbold for the state title. 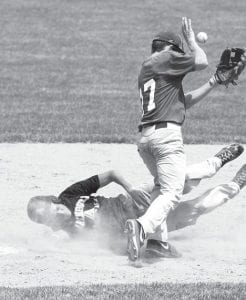 Dropping into the loser’s bracket, Coldwater beat Findlay 2-0, then lost to Anthony Wayne.

The game was scoreless until the top of the seventh inning, when two errors by the Cavaliers resulted in Archbold’s two runs.

Ben Bucklew got on base after being hit by a pitch, then advanced to second.

Ian Radabaugh stepped up to the plate, hit the ball to Aaron Harlamert, Coldwater’s shortstop, who committed an error. Harlamert overthrew the third baseman, allowing Bucklew to score.

An overthrow by Brandon Forsthoefel, the Coldwater catcher, brought Radabaugh home for the game’s final run.

Derek Walker went the distance on the mound for Archbold. In seven innings he allowed no runs on three hits, struck out three, and walked two.

Archbold had only two hits, singles by Bucklew and Logan Hogrefe.

Withstanding a seventhinning challenge, Archbold held off the Generals, who had the bases loaded at the final out.

The Streaks struck first with two runs in the first after Seth Mayer hit a single, stole second, and advanced to third on a balk.

Bucklew was walked, then stole second.

“We are a very good team when we score right away,” said Martinez. “When we get the runs right away, it seems like we’re a little bit more comfortable playing.

“It’s going along with the confidence. We score right away and the kids are like, alright, they believe they can do it.”

The Streaks scored three more runs in the top of the third for a 5-0 advantage. With the bases loaded, L. Hogrefe hit a double, bringing home two runners, and Walker hit a line drive up the middle to score the third run.

Anthony Wayne scored twice in the bottom of the inning for a 5-2 score.

The Streaks crossed the plate three times in the fourth, twice in the fifth, and once in the sixth for their total of 11.

The Generals scored five runs in the fourth, fifth, and sixth innings to close the gap to 11-7.

Bucklew, who pitched 6 1/3 innings, was relieved by Walker with the bases loaded. Walker walked the first batter, but then struck out the next. Ryan Meyers popped up a foul ball, which was caught by the Streaks, and Archbold advanced to the championship game for the first time in history.

Bucklew allowed eight runs on 14 hits, struck out none, and walked two.

It was a “team victory,” said Martinez. “It was huge. All of our kids had a part of that.

“The bottom of our order, it seemed like, they came up every time and got that clutch hit.

“I was happy for the kids.”